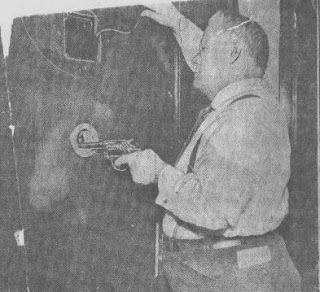 Do you all normally answer the door with a gun in your hand?

Oh Ok, I guess I better start doing that too.

Man hospitalized after shooting
By Scott Sticker -Herald Zeitung
A man was hospitalized after a shooting Tuesday afternoon in the 100 block of East Glenbrook Drive.New Braunfels Police spokesman Lt. Mike Penshorn said James Sullivan, 25, told police a white man in a white shirt and black pants knocked on his door and asked to buy drugs.

Sullivan told investigators he always carried a handgun when he answered the door, Penshorn said.

A struggle allegedly broke out between the two men and the handgun went off, during which Sullivan was shot in the right arm. Sullivan reported that the suspect then ran from the scene, police said.A dozen New Braunfels police officers, an ambulance and fire truck responded to the scene.Detectives from New Braunfels are still interviewing witnesses and neighbors, but as of Tuesday evening, Penshorn said no witnesses reported seeing anyone matching the suspect’s description.

No other description was given by Sullivan and police said it was not known if the suspect went to any other apartments searching for drugs or what prompted the struggle. Sullivan was taken by ambulance to University Hospital in San Antonio with non life-threatening injuries, Penshorn said. A University Hospital spokewoman said Sulivan’s condition was stable.

There was no one else in the apartment at the time of the shooting Penshorn said, but neighbors said Sullivan and his wife, Ashley, had two children and had moved to the Glen Brook Apartments earlier this year.

Police said there had not been calls to the address since the early 90s and New Braunfels Police Department haven’t had any previous dealings with Sullivan.
Posted by Sam at 7:11 AM