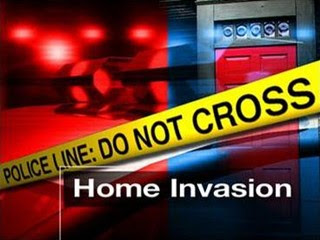 Please finds these perps quickly as they will continue on and do something else.

Police are searching for two men who shot and killed a man and wounded his girlfriend during an overnight home invasion on the East Side. The men forced their way into the couple's second-floor apartment in the 1300 block of Rigsby Avenue around midnight and demanded money and drugs before shooting the man in the head and his girlfriend in the leg, police said.

The men ransacked the apartment before leaving in a white vehicle. Officers believe the intruders might have targeted the wrong apartment; they found no evidence of drugs and it did not appear that anything was taken from the apartment.

The girlfriend, who was talking to her sister on the phone when the ordeal began, was being treated for the wound and shock at Brooke Army Medical Center. Authorities are investigating whether the men might have targeted the wrong people and whether they were involved in another home invasion in Northeast Bexar County.

An hour after the East Side incident, sheriff's deputies were called to a robbery at a home in the 7100 block of Elk Trail Drive. Investigators say there are some similarities in both cases including the description of the suspects. If caught, the two men will be charged with capital murder.
Posted by Sam at 6:41 AM