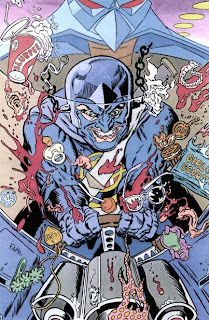 Three hours after being released from jail after serving the second of three weekends in jail on reckless driving charges he's allegedly racing down Culebra and loses it crashing and killing his passenger in the process.

Yes, yes I know, he's a great guy and you'll send me nasty e-mails about being a prick, tell that to the family of the dead passenger. What was this guy Rosykie thinking?

Time in jail didn't keep him out of car
By Michelle Mondo - Express-News
A 22-year-old man was released from jail on a reckless driving charge just hours before authorities said he raced down a west Bexar County road, careening across four lanes and slamming into a pole, instantly killing the friend who sat beside him.
Authorities said Elwin Rozyskie III, whose Mitsubishi Eclipse reached speeds up to 80 mph during an impromptu race initiated at a traffic stop Nov. 2, was released from the Bexar County Jail about three hours before the early-morning crash, his penchant for speed apparently unabated.
Taken by ambulance to University Hospital after firefighters cut him from the mangled remains of his sports car, Rozyskie was charged by proxy with racing on a highway resulting in death. Bexar County Sheriff's Deputy Ino Badillo, an office spokesman, said Rozyskie remains in the medical ward of the jail, his bond set at $20,000.
His friend, 20-year-old Jayson Mrazek, a recent Medina Valley High School graduate, was declared dead at the scene, on Culebra Road near FM 1560. His funeral was held Saturday in Castroville.
Rozyskie's family could not be reached. Relatives of Mrazek, described as “awesome” by grieving friends on his MySpace page, which includes photographs showing him playing a guitar, declined to comment about the collision.
Authorities said the crash, at 2:14 a.m., occurred after Rozyskie's car hit a curb and careened across four lanes, two of them with oncoming traffic. Both men had to be cut from the wreckage.
A witness told authorities Rozyskie's Eclipse and another car engaged in what appeared to be an impromptu race on Culebra Road. Police have been unable to locate the other driver, who according to the report made a right turn onto FM 1560, while the Eclipse continued heading west until it crashed.
The collision was the second of its kind in San Antonio in less than three weeks.
On Oct. 12, street racers were blamed for sending three members of a family whose vehicle had stalled on Loop 410 to University Hospital. The family, all of whom suffered serious injuries, was in a stalled car on the shoulder of Loop 410 at Babcock Road when a Volkswagen Jetta that had been racing another car slammed into theirs.
In that incident, police charged Geraldo Candelas, 22, with racing on a highway causing serious bodily injury or death.
According to county records and court documents, Rozyskie was released from the county jail at 12:34 a.m. Nov. 2, having served his second of three weekends for a February charge of recklessly driving a car in “willful and wanton disregard for the safety of persons and property.”
Rozyskie pleaded no contest to the charge on Oct. 22, and was required to pay a $200 fine, $428 in court costs and spend 30 days in jail, with two of those already served immediately after the arrest, court records show.
But instead of requiring him to serve 30 days at once, the court granted him three weekends to satisfy the jail term, not unusual for minor offenses, officials said. Inmates arrive on Friday and are released on Sunday. Processing “weekenders,” as the inmates are called, begins at midnight.
Accounting for daylight-saving time, which set the clocks back one hour that morning, Rozyskie was again behind the wheel of a car less than three hours later, authorities said, speeding down a county road, his friend in the passenger seat.
Posted by Sam at 7:04 AM