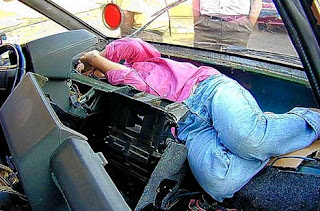 I wasn't even aware this was a problem other than smuggling in illegal immigrants.

Texas AG Wants to Crackdown on Human Smuggling
Report Details How State Can Stop Smuggling
AUSTIN - Lawmakers in Austin are going over a report that shows how state laws could slow down human smugglers and provide better services for victims. Officials say 25 percent of all human trafficking victims come through Texas and many end up becoming slaves or are forced to become prostitutes.
State Senator Leticia van de Putte from San Antonio and the Texas Attorney General worked on the report. They say Texas already has the tools to fight against human smuggling. Attorney General Greg Abbot says, "We have the manpower and expertise to devote to cracking down on this problem, and we have the ability to respond to whatever request or expectations the legislature will have for us."
The report makes 21 recommendations including providing more training for authorities to identify human smuggling rings. Visit http://www.oag.state.tx.us/AG_Publications/pdfs/human_trafficking.pdf to see the report for yourself.
Posted by Sam at 8:01 AM