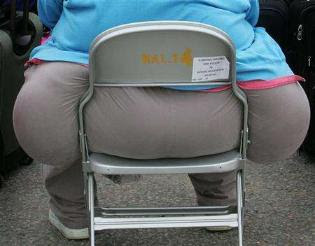 On to much weightier issues than presidential pardons.

I hate airline seats. I hated airline seats even when I was a runner and cut a much more svelte figure than I do now. I understand the airlines' perceived need to pack us in like sardines but Man, I sometimes get off a plane and can hardly walk and am out of wack for days at a time.

Maybe they can have a larger seat area that folks can pay extra for.
From the blog Starling Fitness:
"According to Size Wise, the measurement of the width of airline seats ranges from 17″ to 21.5″. I just measured the width of my own butt and it’s 18″ wide. Am I a person of size? Do I have to pay for another seat as well? Even the thinnest of people are uncomfortable in airplane seats."
No, I haven't measured the width of my butt, you're welcome to post your butt width if you choose to.

The decision ended a six-year battle by disabled travellers to secure two seats for the price of one if they need inflight attendants. Obese people can also qualify if they are too large to fit in a single seat.
Air Canada and WestJet failed in their pitch for the court to consider a January 2008 decision from the Canadian Transportation Agency that gave them one year to implement new policies in the absence of being able to show that a "one-person, one-fare" structure would cause undue hardship.
"This means I'm equal now," said Joanne Neubauer, a Victoria woman whose severe rheumatoid arthritis requires her to use a wheelchair. "I'm just so excited and happy that justice prevailed."
The agency said the airlines must develop a process to assess eligibility. The free seats need not be provided to obese people who are just uncomfortable in their seats or are not disabled by their size, said the ruling.
The airlines also do not have to make allowances for disabled people who prefer to travel with a companion for personal reasons or those who require care on the ground, but not in the air.
"The agency is leaving it up to Air Canada and WestJet to develop their own screening policies," said agency spokes-man Marc Comeau.
A possible sticking point is how to decide when obesity is a disability. The agency has recommended the airlines adopt a policy used by Dallas-based Southwest Airlines, which gives a free seat to people who are too big to lower their armrest.
The ruling is expected to benefit would-be travellers like Linda McKay-Panos, a Calgarian who has secured a declaration from the Federal Court of Appeal that she is obese enough to be considered disabled.
Ms. McKay-Panos, executive director of the Alberta Civil Liberties Research Centre, said yesterday that she has not travelled on Air Canada since 1997, when she endured a "humiliating" flight in which the airline refused her an extra seat even though "my hips were flowing over the arm rest, my hips were basically on the lap of the person who sat beside me."
Now 51, she said she was born with Polycystic Ovary Syndrome, a hormonal disorder that causes obesity in about 50 per cent of those afflicted.
The transportation agency estimated that it would cost Air Canada an additional $7.1 million annually to change its rules and WestJet an extra $1.5 million, adding 77 cents to each ticket sold by Air Canada and 44 cents for a WestJet fare.
The carriers have predicted that their costs would be significantly more because the policy would be abused.
Air Canada spokesman Peter Fitzpatrick said yesterday that the airline will comply with the decision and that it has already started working on screening procedures and employee training. He also noted the policy will only apply to domestic flights, reflecting the agency decision.
The case began in 2002, when Ms. Neubauer, Eric Norman, and the Council of Canadians with Disabilities launched a complaint with the transportation agency. Mr. Norman, who died two years ago, lived in Gander, N.L., and used to travel to Toronto for cancer treatment. He was paraplegic and required an attendant for air travel.
Ms. Neubauer, who said she seldom flies because the cost of two tickets is prohibitive, needs an attendant to help with everything from boarding to visiting the bathroom.
The "one-person, one fare" policy already exists for other modes of public transport such as buses, trains and ferries.
Posted by Sam at 7:24 AM