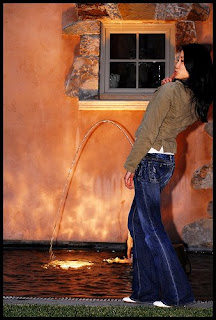 I mean holy smokes, is this guy nuts or what?

Even if he has a drinking problem this goes way beyond that. Put him out of office and let him get the help he sorely needs.

At least he didn't shout "Let them eat cake" as he golden showered the peasants.

Pol Who Peed on Crowd Swears Off Booze

The New Jersey councilman who allegedly urinated on a crowd of concertgoers from the balcony of a Washington, D.C. nightclub swore off booze on Sunday -- two days after he was busted for the embarrassing stunt.

Jersey City councilman Steven Lipski has reportedly been arrested for urinating on a crowd of concertgoers from the balcony of a Washington D.C. nightclub.
"I've resolved not to touch alcohol again," two-term Jersey City councilman Steve Lipski told the Fox 5 New York.
He went on to say that the incident was "deeply humiliating, very embarrassing" and troubling," the Daily News reported. (You think?)
The 44-year-old Democratic councilman refused to admit to the lewd stunt.
"I can't comment on that," he told Fox5 News. "I'm going to continue to do all the good things, and I'm not going to let this overshadow me."
Lipski was in D.C. to see a Grateful Dead tribute band and was spotted relieving himself by one of the club's staffers around 9:50 p.m., club sources told the Daily News. He was charged with simple assault.
Messages left at Lipski's council office, and a Jersey City listing under his name were not immediately returned.
Posted by Sam at 6:50 AM