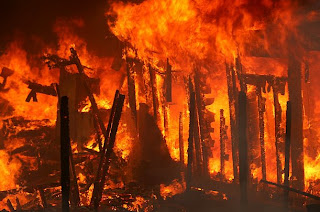 Very sad for the community, not to mention costly.

Dangerous too, due to the lack of rain and drought conditions, any fire may go wildly ouut of control.

I hope the perps are caught soon, because it sure does sound like arson.

Fires have Marion resting none too easy
By Roger Croteau - Express-News
MARION — Residents are on edge each day at twilight, worried that the dawn could bring news of another fire.
On five nights since mid-September, suspicious fires have damaged or destroyed buildings in this close-knit community of about 1,200 people. One has resulted in juvenile arson arrests. The others are unexplained.
“There is an awful lot of history here and so far they've burned up a good part of it,” said Roger Scheffel, owner of Helping Hand Hardware. “I come and check on my business, usually once or twice a night.”
The most recent fire was discovered at El Vaquero Saloon by a Marion police officer patrolling the area after 3 a.m. on Nov. 14. He held off the blaze with a garden hose until firefighters arrived, so damage was largely contained to a storeroom.
The first fire came the night of Sept. 18, when Don's Auto Repair was destroyed. On the night of Sept. 19, a suspicious fire burned Penshorn's Meat Market and Blue Moon Antiques.
Within hours of that blaze, two boys were arrested and reportedly confessed to the auto shop fire, but they deny setting the second one, said Marion Mayor Glenn Hild.
One of the boys has since been released from juvenile detention but ordered to stay at his grandparents' house in Bexar County and not to enter Guadalupe County.
Another fire broke out the night of Oct. 10 at a vacant house on Wetz Road. Investigators said the owner had recently done electrical work that could have sparked it, but the cause has not been determined.
Two weeks later, on Oct. 24, the old Marion Train Depot on East Krueger Street, which was being used for storage, was destroyed by a suspicious fire.
“I'm at a loss,” Hild said. “We've started 24-hour police patrols. We took the money from street repair and maintenance and hired another officer. He was the first one on the scene at the last fire.”
Guadalupe County Sheriff's Department spokesman Kevin Jordan said material from all the fires has been sent to a Texas Department of Public Safety lab to see if testing can produce evidence of arson.
The local business community has pledged about $7,000 as a reward for anyone who can provide information leading to an arrest and conviction.
“Sure, it's frustrating,” Hild said. “Everything we follow up turns out to be a dead end. We're just keeping our eyes and ears open.”
Scheffel said the loss of the antique store has reduced downtown foot traffic, and his own business is down 30 to 40 percent on weekends as a result.
Penshorn's lost its meat market but has a nearby building, used for deer processing, that was not destroyed. It's open for business, processing game for hunters and with a smaller meat counter, and holiday ham and turkey sales are going on as usual.
“I just hope no other businesses in Marion have to go through what we did,” said owner Leona Penshorn. “It's been pretty rough. It's nerve-wracking to think who could be next, but I don't think it's over yet.”
Posted by Sam at 7:08 AM