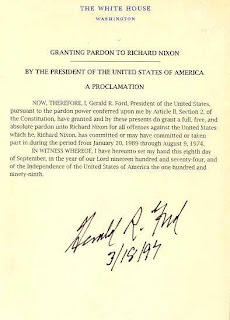 At least it doesn't seem to be as wantonly misused as it appeared to be at the end of the Clinton administration. Where Hillary's brothers received large sums of money for "brokering" pardons and Marc Rich was pardoned, hours before Bill Clinton left office, after his wife had made large donations to the Clinton Library and the Democratic party.

And of course, pictured above, the infamous pardon of Richard Nixon, which helped heal the country from Watergate and probably cost a good man, Gerald Ford, re-election as president. Obviously autographed by the former president on a different date, much later than the pardon issued.

WASHINGTON (AP) - President George W. Bush has granted pardons to 14 individuals and commuted the prison sentences of two others convicted of misdeeds ranging from drug offenses to tax evasion, from wildlife violations to bank embezzlement, The Associated Press learned Monday.

The new round of White House pardons are Bush's first since March and come less than two months before he will end his presidency. The crimes committed by those on the list also include offenses involving hazardous waste, food stamps, and the theft of government property.
Bush has been stingy during his time in office about handing out such reprieves.
Including these actions, he has granted a total of 171 and eight commutations. That's less than half as many as Presidents Clinton or Reagan issued during their time in office. Both were two-term presidents.

On the latest pardon list were:
_Leslie Owen Collier of Charleston, Mo. She was convicted for unauthorized use of a pesticide and violating the Bald and Golden Eagle Protection Act.
_Milton Kirk Cordes of Rapid City, S.D. Cordes was convicted of conspiracy to violate the Lacey Act, which prohibits importation into the country of wildlife taken in violation of conservation laws.
_Richard Micheal Culpepper of Mahomet, Ill., who was convicted of making false statements to the federal government.
_Brenda Jean Dolenz-Helmer of Fort Worth, Texas, for reporting or helping cover up a crime.
_Andrew Foster Harley of Falls Church, Va. Harley was convicted of wrongful use and distribution of marijuana and cocaine.
_Obie Gene Helton of Rossville, Ga., whose offense was unauthorized acquisition of food stamps.
_Carey C. Hice Sr. of Travelers Rest, S.C., who was convicted of income tax evasion.
_Geneva Yvonne Hogg of Jacksonville, Fla., convicted of bank embezzlement.
_William Hoyle McCright Jr. of Midland, Texas, who was sentenced for making false entries, books, reports or statements to a bank.
_Paul Julian McCurdy of Sulphur, Okla., who was sentenced for misapplication of bank funds.
_Robert Earl Mohon Jr. of Grant, Ala., who was convicted of conspiracy to distribute marijuana.
_Ronald Alan Mohrhoff of Los Angeles, who was convicted for unlawful use of a telephone in a narcotics felony.
_Daniel Figh Pue III of Conroe, Texas, convicted of illegal treatment, storage and disposal of a hazardous waste without a permit.
_Orion Lynn Vick of White Hall, Ark., who was convicted of aiding and abetting the theft of government property.

Bush also commuted the prison sentences of John Edward Forte of North Brunswick, N.J., and James Russell Harris of Detroit, Mich. Both were convicted of cocaine offenses.
Under the Constitution, the president's power to issue pardons is absolute and cannot be overruled.

One hot topic of discussion related to pardons is whether Bush might decide to issue pre-emptive pardons before he leaves office to government employees who authorized or engaged in harsh interrogations of suspected terrorists in the wake of the Sept. 11, 2001, attacks. Some constitutional scholars and human rights groups want the incoming administration of President-elect Barack Obama to investigate possible war crimes.

If Bush were to pardon anyone involved, it would provide protection against criminal charges, particularly for people who were following orders or trying to protect the nation with their actions. But it would also be highly controversial.
At the same time, Obama advisers say there is little - if any - chance that his administration would bring criminal charges.
Posted by Sam at 7:08 AM