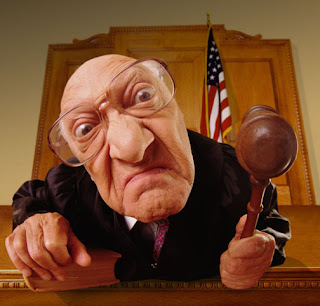 Well, more guaranteed legal drama for a while it appears.

Prosecutor who had Cheney indicted yells at judge
By CHRISTOPHER SHERMAN

RAYMONDVILLE, Texas (AP) - A county prosecutor who brought indictments this week against Vice President Dick Cheney and others pounded his fist and shouted at the judge Friday during a routine hearing. Willacy County District Attorney Juan Angel Guerra asked Presiding Judge Manuel Banales to recuse himself from the case, which alleges abuse at federally run prisons.

Attorneys for the vice president and other defendants leapt to their feet in objection as Guerra pounded the table and accused Banales of giving the defendants special treatment.
"Now all of a sudden there is urgency," Guerra shouted. "Eighteen months you kept me indicted through the election."

Guerra lost his bid for re-election in the March primary and will leave office in January. He was indicted last year on charges he extorted money from a bail bond company and used his office for personal business, but the charges were dismissed last month.
Guerra said the judge was wrong to allow motions to quash the indictments to be heard before the defendants were arraigned.


Banales called a recess so he could try to contact the chief justice of the state Supreme Court for suggestions on how to proceed, and ordered Guerra, who had slipped out once during the hearing, to remain in the courthouse.
Guerra first said "I will not obey that order," but then agreed to stay if the judge asked him respectfully.

After the recess, Banales adjourned for the day and announced that he would send all documents pertaining to the recusal motion to the chief justice. He tentatively scheduled the parties to return to court Wednesday.


Curious residents packed the well-worn pews of the Willacy County Courthouse's only courtroom for Friday's hearing. The defendants were not required to appear in person.
Cheney and former Attorney General Alberto Gonzales were indicted in connection with privately run federal detention centers in Willacy. In particular, it alleges that Cheney's personal investment in the Vanguard Group, which invests in private prison companies, gives him culpability in alleged prisoner abuse.

Guerra also indicted judges and special prosecutors who played a role in the investigation of him.
T. Gerald Treece, a constitutional law specialist and professor at the South Texas College of Law in Houston, this week questioned Guerra's jurisdiction.
"You can't have district attorneys across the country bringing charges against federal officials," Treece said. And even in a federal probe, Cheney and Gonzales have a "qualified privilege" that would protect them so long as they were acting within their jobs, Treece said.
Posted by Sam at 5:46 AM