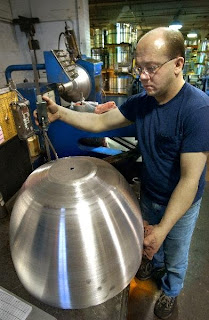 That's a load of bull.

The bull semen was taken during a raid on an outbuilding
Bull semen worth about £12,000 has been stolen from a farm building in south west Scotland.
The incident happened near Brydekirk in Dumfries and Galloway some time between Sunday and Thursday.
The semen is stored in a purpose-built flask containing liquid nitrogen in order to keep it at a fixed temperature.
A police spokesman said the flask was the only item taken during the raid on the farm.
The specimens were stored in an outbuilding. It was noticed on Thursday that they had been taken.
The flask contained about 400 "straws" of semen.
A Dumfries and Galloway Constabulary spokesman said that some form of transport must have been used in the raid as the flask weighed more than 30kg. (approximately 66 pounds)
"It was all that was taken and they have forced entry," he said.
"Due to the high value it will have a market - somebody will take it off their hands."
Posted by Sam at 6:54 AM