Very funny when you think about it 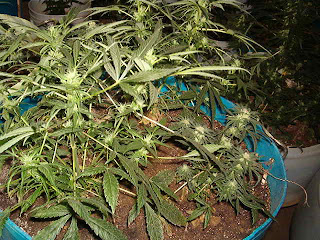 LOL, no worries about finding probable cause for the stop since they were driving a car without license plates. They can't run away from the car because they are in the back seat and the child safety locks were on.

No wonder they call it dope.

Four women were arrested after they were caught with a duffle bag full of marijuana during a traffic stop early Tuesday morning. The women range in age from 18 to 25 faces felony drug possession charges.

An officer stopped a car without license plates shortly before 12:30 a.m. near the Spring Hill Apartments in the 4800 block of Ray Bon Drive.A man driving the car ran away leaving four women inside. Three of the women attempted to escape from the backseat but couldn't because the car's child safety locks were on.

Investigators say all of the women tried stuffing the marijuana in the car's seats and in a chocolate shake.Police have some leads on identifying the driver that left the scene.
Posted by Sam at 6:34 AM