Make them sit in the corner 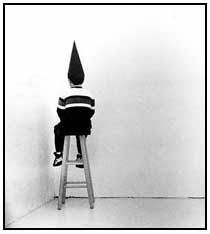 Holy smokes! How many violations of both State and Federal laws were committed?

Particularly after the school district was specifically warned not to continue with this practice.

Heads should roll over this and charges brought.

Dallas ISD faulted for using fake Social Security numbers
By TAWNELL D. HOBBS / The Dallas Morning News
Years after being advised by a state agency to stop, the Dallas Independent School District continued to provide foreign citizens with fake Social Security numbers to get them on the payroll quickly.
Some of the numbers were real Social Security numbers already assigned to people elsewhere. And in some cases, the state's educator certification office unknowingly used the bogus numbers to run criminal background checks on the new hires, most of whom were brought in to teach bilingual classes.
The practice was described in an internal report issued in September by the district's investigative office, which looked into the matter after receiving a tip. The report said the Texas Education Agency learned of the fake numbers in 2004 and told DISD then that the practice "was illegal."
It's unclear how long DISD had been issuing the phony numbers, and district officials didn't know Thursday how many had been given out. But the investigative report and interviews with DISD employees indicate the practice went on for several years before it was discontinued this past summer.
DISD human resources chief Kim Olson, who came to the district in 2007, said that she learned about the false numbers this past summer around the time the district's investigative unit was looking into them and that she put a stop to the practice.
"There's no way we should be doing that kind of stuff," Ms. Olson said. "Even if your intention is good to help employees get paid, you can't use inappropriate procedures to do that."
Stopgap approach
The investigative report, obtained by The News through a records request, found "that the inappropriate procedure of assigning false SSNs has been systemic for several years" within DISD's alternative certification program, which prepares new teachers for state certification when they don't have traditional credentials.
A call Thursday to DISD's alternative certification office was not returned. In recent years, DISD has hired people from various countries, including Mexico and Spain, to deal with a shortage of bilingual teachers.
The fake numbers were assigned as a stopgap to expedite the hiring process, the report says. The numbers were supposed to serve as temporary identification numbers until employees received real Social Security numbers. Once employees got the real numbers, they were supposed to tell district officials so the fake ones could be replaced.
The investigation found no indication that the fake numbers were provided to the Teacher Retirement System, the Internal Revenue Service or the Social Security Administration.
However, according to the report, a sampling of several fake numbers showed that they had been included in a July quarterly report sent to the Texas Workforce Commission.
Also, when investigators reviewed a sampling of personnel files, they learned that the fake numbers were entered on Department of Homeland Security and IRS forms. The forms are not transmitted outside the district but are made available to the appropriate federal agency upon request.
In July, the district discovered that 26 of the false numbers were in use after matching DISD employee Social Security numbers with the Social Security Administration database. The numbers were already being used in Pennsylvania. DISD officials did not know Thursday whether the practice had caused problems for anyone holding the legitimate numbers.
The district's investigative unit, called the Office of Professional Responsibility, began looking into the fake numbers after the Texas Education Agency's division of educator investigations advised the unit in July that it had discovered the district issuing false numbers in 2004.
That year, the TEA division became aware of the practice when DISD faxed copies of about 100 new Social Security Administration cards for foreign citizens – most of whom had been assigned district-issued numbers – and asked TEA to replace the old numbers, according to the investigative report. The state office told DISD at the time that it's illegal to make up Social Security numbers and pass them off as legitimate, the report says.

Doug Phillips, TEA's director of investigations and fingerprinting, said his office believed the district had stopped the practice because there was no evidence that it continued. He said Thursday that he didn't know which laws forbid issuing fake Social Security numbers.
"We just knew it looked bad and smelled bad," Mr. Phillips said. "That was the first time we'd ever heard of that one."
Mr. Phillips said it created "a mess" in a state database. He said teacher applicants who don't have a Social Security number can receive a temporary identification number, which begins with a "P," from TEA until they get one from the federal government.
The DISD-issued Social Security numbers began with "200" – a prefix assigned to people in Pennsylvania, and Mr. Phillips' office noted that many ended with sequential numbers.
The investigative report also found that the district hasn't been turning in "new hire" forms to the Texas attorney general's office, which uses the information to find parents who haven't paid child support. Failure to provide the forms to the attorney general can result in a $25 fine for each employee. The district doesn't know yet whether it will have to pay any fines.
Ms. Olson said new processes have been put in place to address problems noted in the report, including making crosschecks with the Social Security Administration.
"You can't just arbitrarily issue Social Security numbers," she said. "Even if your intention is good, it's not legal."