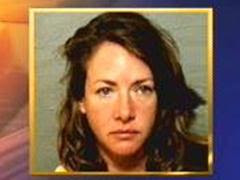 More of the story about yesterday's amber alert.

Please call if you have any information about the woman pictured here.


Comal County Sheriff’s investigators are searching for a Spring Branch woman they believe severely beat her mother and took away her own daughter.


The grandmother had legal conservatorship of 6-year-old Jewel Noel Klein. An Amber Alert has been issued for the girl, who was picked up by an unknown person driving her grandmother’s car at Rebecca Creek Elementary School on Tuesday afternoon.


Investigators believe the driver was Tonya Renee Martin, 41, Klein’s mother. Deputies were called later that evening to the 7000 block of Broken Arrow in Spring Branch, where they found Melba Balantac, 68, with serious upper body trauma.


Deputies were able to communicate with Balantac for a short time, and she was able to give them some information, implicating her daughter, he said. She was taken to University Hospital, which could not immeditately release her condition.


Investigators realized Klein was missing only after Balantac was taken to the hospital, Reynolds said. He said Martin was seen driving Balantac’s blue Hyundai Sonata before the assault.
Klein has blond hair and blue eyes, is 4 feet tall and weighs 60 pounds. She was wearing a red plaid sundress.


Martin also has blond hair and blue eyes, stands 4 feet, 2 inches tall and is 107 pounds. A warrant for her arrest on a charge of aggravated assault was issued Wednesday.
Investigators said they do not know where she may have gone with Klein.


If you have any information regarding the whereabouts of Klein or Martin, call the Comal County Sheriff's Department at (830) 620-3400.
Posted by Sam at 5:20 AM