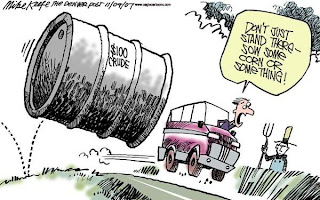 Hmmph. The Saudi Arabians say a reasonable price is $75 a barrel.

Man o' Law says its just fine where it is right now. Let's make it about $50 a barrel.

Tell that to OPEC. LOL

Iraqi Oil Minister Hussein al-Shahristani said on Friday that 80 dollars a barrel is a "reasonable" price for oil and that his country would support any OPEC decision to cut output.
"A reasonable price for oil is 80 dollars a barrel," said Shahristani on arrival in Cairo to attend a consultative meeting by the OPEC cartel to study slumping crude prices.
"We have to make sure that produced oil is used for consumption and not for storing.
"Iraq would support a decision by OPEC to cut output either here or in Algeria," the Iraqi minister added.
Organisation of Petroleum Exporting Countries ministers are to meet in Cairo on Saturday amid pressure for production cuts to stem heavy oil price losses, which continued to mount on Friday.
Most cartel members appeared to rule out an immediate reduction, preferring instead to wait until the next scheduled meeting in Oran, Algeria on December 17.
Iraq is excluded from the OPEC quota production system. OPEC's official output, excluding Baghdad, stands at 27.3 million barrels per day.
World oil prices closed mixed on Friday amid signs the OPEC producers' group would wait until next month before announcing any decision to cut output.
Light sweet crude for delivery in January fell one cent to 54.43 dollars a barrel on the New York Mercantile Exchange (NYMEX) as trading resumed after markets were shut Thursday for the Thanksgiving holiday break.
On London's InterContinental Exchange (ICE), Brent North Sea crude for January rose 36 cents in late trading to end 53.49 dollars a barrel.
Posted by Sam at 8:20 AM