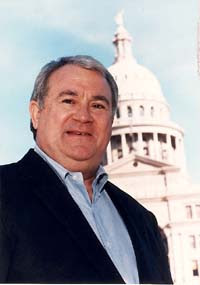 He was a good and compassionate man and fought the good fight for the citizens of Texas.

Our condolences to his family. Rest easy Sir.

Jim Mattox, former Texas AG, dies at 65
By Janet Elliott - Austin Bureau
AUSTIN -- Jim Mattox, the self-styled ``people's lawyer'' who took on major corporations during eight years as Texas attorney general, has died.
Mattox, 65, died overnight, said Democratic consultant Kelly Fero. He didn't have additional details.
He served two terms as attorney general, starting in 1983. He ran for governor in 1990 but was defeated by Ann Richards in a bitter Democratic primary battle.
James Albon Mattox was born in Dallas on Aug. 29, 1943 to a union sheet metal worker and waitress. He attended Woodrow Wilson High School in Dallas, worked his way through the Baylor School of Business and earned his law degree from Southern Methodist University.
He worked as a prosecutor for Dallas County District Attorney Henry Wade and began his political career in 1973 as a state representative from East Dallas.
While in the Texas House, he worked on ethics reform and open government legislation.
Mattox was elected to the 5th Congressional District in 1976.
As attorney general, he built the office into a modern law firm and hired a diverse staff of women and minority lawyers. His legal team handled more than 2 million cases and won judgments totaling more than $2.5 billion for the state.
After losing his bid for governor, Mattox ran unsuccessfully in the 1994 Democratic primary for U.S. Senate. He tried for a comeback as attorney general in 1998, but lost to Republican John Cornyn.
Mattox stayed active in Democratic politics. He attended this year's national convention in Denver, calling it ``the biggest and the best'' of several he had attended.
He is survived by his wife Marta, son Jim (known as Jimmer) and daughter Janet (known as Sissi). Other survivors include his sister Janice and brother Jerry, both of Dallas.
Posted by Sam at 6:58 AM