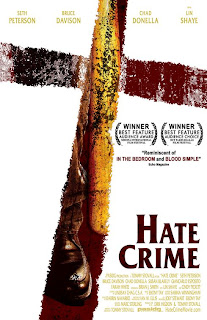 But as I've said before aren't all such crimes hate crimes in reality?

Police say Dwight DeLee, 20, shot and killed Moses Cannon, known by friends and family as Latiesha Green. The victim, 22, was a transgendered person. DeLee was arraigned Monday morning in Syracuse City Court on a charge of second degree murder. No bail was set and DeLee remains in custody.

Syracuse Police say they believe DeLee's motive was a dislike for Cannon's sexual orientation. Now, the Onondaga County District Attorney's office is considering whether it will also charge DeLee with a hate crime. If convicted on both charges, DeLee would receive a longer prison sentence. However, Assistant District Attorney Mark Trunfio says it may be difficult to prove hate played a role in the shooting. A friend told Latiesha and her brother Mark Cannon, 18, to stop by a party at 411 Seymour Street on Friday night. When they pulled up to the building, police say a number of people took issue with the duo because of their sexaulity.

DeLee allegedly walked up to the parked car and began shouting profanities. Police say he then went inside the house and came back out with a .22-caliber rifle. DeLee fired a single round through the driver’s side window, according to police. The bullet grazed Mark Cannon’s arm and hit Latiesha in the chest.

Mark, who was sitting in the driver’s seat, drove to Arthur Street where an ambulance picked the siblings up and took them to University Hospital. Latiesha was later pronounced dead. Mark was treated and released.

DeLee fled the party after the shooting. Police later found him at a home in Liverpool where he was arrested. Police say DeLee has a history of weapons and drug charges on file.

About 70 people attended a candlelight vigil for Latiesha Green on Arthur Street on Monday night. Balloons were hung, and mourners lined up to write their goodbyes on a memorial mural. Latiesha's mother, Roxanne Green, expressed her frustration with the crime. "Because why would you take his life," she asked, "just because he's gay?" She then shook her head in disgust.
Posted by Sam at 5:55 AM