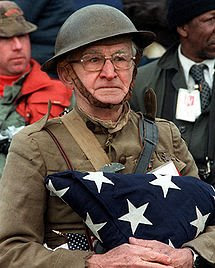 This Tuesday is Veteran's Day, a day set aside to honor those men and women who have served this great nation of ours in times of need and in peacetime as well.

For those of us old enough to remember it was formerly called Armistice Day in remembrance of the 11th hour of the 11th day of the 11th month when the Armistice took effect and quiet and peace settled over the killing fields of No man's land and the trenches of WW I. The change to Veteran's Day was made in 1954.

A hearty salute and grateful thanks from Man o' Law and his family to all of you veterans.

Cheering those who served
By Abe Levy - Express-News
About 15 Vietnam veterans sipped soft drinks and pitched ideas for dining later that night as waves of elaborate floats, marching bands and antique cars eased along downtown streets to honor veterans on a sunny Saturday afternoon.
The ninth annual Veterans Day Parade — and its crowd of babies, schoolchildren and moms and dads — stood in contrast to the monsoons, whizzing bullets and occasional tigers and snakes that created a sacred bond for these men in Vietnam jungles 40 years ago.
“We're a band of brothers,” said Art Cuellar, a San Antonio member of this 4th Infantry platoon whose members traveled from nine states to see the parade.
Hundreds of veterans from all branches of the military soaked in God-bless-yous, thank-yous and welcome-homes during the two-hour event. An estimated 10,000 people lined the streets for the parade, which kicked off with a rifle volley and then the playing of taps in Alamo Plaza.
Organizers said community support for veterans at this parade is the direct result of San Antonio's longstanding appreciation for the military and the impact of current military conflicts hitting closer to home.
“Nowadays, with the wars we're involved in, people are more aware of our veterans and how important they are to us,” said grand marshal and local artist Jesse Treviño. “People are realizing it takes a lot of guts to go fight in a war.”
To create a patriotic setting, 4,000 hand-size U.S. flags were dispersed throughout the crowd, creating a flutter of red, white and blue along with the patriotic-themed colors of dance groups, cheerleading squads, high school and community bands, and floats.
Each time a former prisoner of war or veteran of combat passed by, the applause strengthened.
“Every day we can remember a veteran is a great day. It doesn't get old. We're all family,” said Daniel Medrano, president of San Antonio's chapter 366 of the Vietnam Veterans of America.
His group decked out a red pickup with the service colors of the Vietnam War, green, yellow and red. It hauled a trailer for members and spouses to sit in. On the side, it had the group's motto: “In Service to America.”
Posted by Sam at 7:15 AM