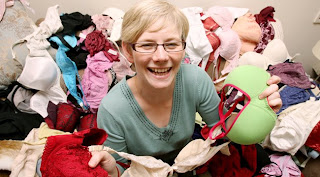 I thought about posting an uplifting article. So in that spirit here it is.

Big bra appeal's cups runneth over
By MICHELLE LOTTER - North Shore Times
There have been a few thousand extra bras on Rachel Kitayama-Moore’s washing line.
The Takapuna resident’s home is brimming with up to 3000 secondhand bras ready to be sent to Vanuatu where many women struggle to afford them.
The Rotarian has been collecting them from around New Zealand after hearing about the Pacific Uplift project in which secondhand bras are sent to poorer Pacific Islands including Fiji, Vanuatu, Tonga and Papua New Guinea.
She recently spent more than four hours sorting and packing bras but has a long way to go to meet the demand of 20,000 bras for Vanuatu, she says.
Some women live without a bra because secondhand ones are rare in larger sizes and a new bra can cost up to 30 hours’ wages, she says.
Sports bras for farmwork and maternity bras are in particularly high demand.
The response has been tremendous, with a range of bras up to j-cup size flooding in, says Mrs Kitayama-Moore.
"We’ve got some with spots, some with stripes and some with lace, in every colour imaginable.
"Colleagues sidle up to me with a bag and say don’t judge me by my underwear. You get to know your friends very intimately when they hand over bits of their underwear," she laughs.
Among those who have donated are women who have had a mastectomy or breast reduction surgery.
"It’s a project women really take to heart."
Even some male Rotarians have cheekily asked if help with fitting is required.
To contribute to the Pacific Uplift project, send bras to 18a Waitemata Rd, Takapuna, or go to www.upliftbras.org.
Posted by Sam at 8:21 AM