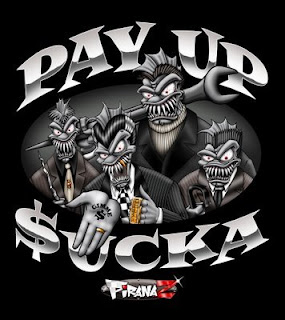 Debts are to be collected.

Three armed men looking to collect a $3,000 debt Monday apparently mistook a South Side family’s apartment for the home of the man who owed them, police said.
Police called to the 200 block of Kelsey Avenue to investigate a shooting about 11:55 p.m. learned that the armed men had made repeated visits to the apartment in search of a man they said had just been released from jail.
Each time, the residents told the men they did not know the man they were looking for, and that they had moved into the apartment just six months ago, according to a police report.
About 11 p.m., the intruders returned and forced their way into the apartment. They fled after they failed to find who they were looking for.
When a man in the home chased after them, one of the gunmen fired, but no one was injured. The intruders remain at large.
Posted by Sam at 7:23 AM