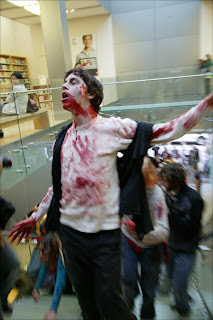 Next up for Scrooge(s) of the Year:
The idiot shoppers at the Valley Stream, New York Wal-mart, whose greed and stupiditudeness (is that a word?) caused the death of an employee and knocked down a pregnant woman when they busted through the doors and trampled folks in a rush to get the stuff on sale on "Black Friday". The folks got angry when they were told thge store was going to close when told about the death of the employee.

I hope the police can id the folks on the videotape.

An aptly fitting name. I see big lawsuits and hopefully the end to such nonsense sales.

NEW YORK (AP) - Police were reviewing video from surveillance cameras in an attempt to identify who trampled to death a Wal-Mart worker after a crowd of post-Thanksgiving shoppers burst through the doors at a suburban store and knocked him down.
Criminal charges were possible, but identifying individual shoppers in Friday's video may prove difficult, said Detective Lt. Michael Fleming, a Nassau County police spokesman.
Other workers were trampled as they tried to rescue the man, and customers stepped over him and became irate when officials said the store was closing because of the death, police and witnesses said.
At least four other people, including a woman who was eight months pregnant, were taken to hospitals for observation or minor injuries. The store in Valley Stream on Long Island closed for several hours before reopening.
Police said about 2,000 people were gathered outside the Wal-Mart doors before its 5 a.m. opening at a mall about 20 miles east of Manhattan. The impatient crowd knocked the employee, identified by police as Jdimytai Damour, to the ground as he opened the doors, leaving a metal portion of the frame crumpled like an accordion.
"This crowd was out of control," Fleming said. He described the scene as "utter chaos," and said the store didn't have enough security.
Dozens of store employees trying to fight their way out to help Damour were also getting trampled by the crowd, Fleming said. Shoppers stepped over the man on the ground and streamed into the store.
Damour, 34, of Queens, was taken to a hospital, where he was pronounced dead around 6 a.m., police said. The exact cause of death has not been determined.
A 28-year-old pregnant woman was taken to a hospital, where she and the baby were reported to be OK, said police Sgt. Anthony Repalone.
Kimberly Cribbs, who witnessed the stampede, said shoppers were acting like "savages."
"When they were saying they had to leave, that an employee got killed, people were yelling 'I've been on line since yesterday morning,'" she said. "They kept shopping."
Wal-Mart Stores Inc. (WMT), based in Bentonville, Ark., called the incident a "tragic situation" and said the employee came from a temporary agency and was doing maintenance work at the store. It said it tried to prepare for the crowd by adding staffers and outside security workers, putting up barricades and consulting police.
"Despite all of our precautions, this unfortunate event occurred," senior Vice President Hank Mullany said in a statement. "Our thoughts and prayers go out to the families of those impacted."
A woman reported being trampled by overeager customers at a Wal-Mart opening Friday in Farmingdale, about 15 miles east of Valley Stream, Suffolk County police said. She suffered minor injuries, but finished shopping before filling the report, police said.
Shoppers around the country line up early outside stores on the day after Thanksgiving in the annual bargain-hunting ritual known as Black Friday. It got that name because it has historically been the day when stores broke into profitability for the full year.
Items on sale at the Valley Stream Wal-Mart included a Samsung 50-inch Plasma HDTV for $798, a Bissel Compact Upright Vacuum for $28, a Samsung 10.2 megapixel digital camera for $69 and DVDs such as "The Incredible Hulk" for $9.
Posted by Sam at 7:35 AM