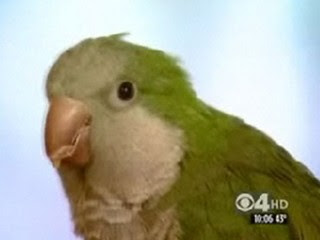 Will a made for TV movie be far behind?

DENVER (CBS4) ― A babysitter's parrot is being credited with helping save the life of a 2-year-old girl who was choking Friday at a Denver area home while the sitter was in the bathroom. "While I was in the bathroom, Willie (the parrot) started screaming like I'd never heard him scream before and he started flapping his wings," said Meagan, the babysitter. "Then he started saying 'mama baby' over and over and over again until I came out and looked at Hannah and Hannah's face was turning blue because she was choking on her pop tart."

Meagan performed the Heimlich maneuver on Hannah, which stopped the choking. "If (Willie) wouldn't have warned me, I probably wouldn't have come out of the bathroom in time because she was already turning blue, her lips were blue and everything," Meagan said. "If anything happened to her, I don't know what I would do," said Samantha Kuusk, Hannah's mother. "I'm very grateful for the both of them because they both saved her."

Willie didn't say much when CBS4 visited on Sunday. Meagan said he is usually pretty talkative. "He says 'I love you' and he says 'mama' and he says 'step up' and some other words that aren't so nice," she said.
Posted by Sam at 7:00 AM