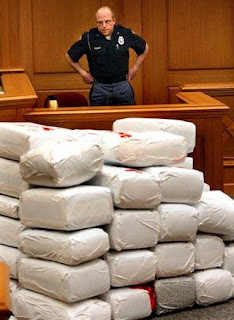 That's $2 million worth of less drugs on the streets of the US to worry about.

The amazing thing is that is over a half-ton of marijuana and is probably a small fraction of the amount of drugs getting in every day.

Laredo agents seize $2 million in drugs
BROWNSVILLE — Border agents in Laredo this week seized marijuana and cocaine valued at close to $2 million, Customs and Border Protection said Friday.
The first seizure was made Monday. Agents found 1,389 pounds of marijuana valued at $1.3 million hidden within blocks of decorative stone on a truck crossing the World Trade Bridge.

There were no arrests and the investigation is ongoing.
Agents on Tuesday found 19 pounds of cocaine valued at $608,000 hidden in a vehicle that had crossed the Gateway to the Americas bridge. Carlos Diaz Ortuno, 61, a Mexican citizen from Pasadena, was arrested.
Posted by Sam at 6:43 AM