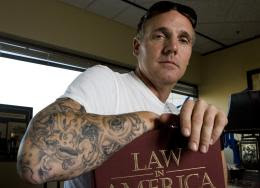 I hope you'll do well. It is a rewarding personal experience.

The devil tattooed on Kevin Fine's upper arm holds a razor blade, a mirror and an eight ball symbolizing cocaine. His forearm sports a tattoo of Jesus holding up a man who has collapsed amid the waves of a massive storm.
Elected by Harris County voters as a state district judge this month, Fine said he'll draw from his experiences as a cocaine addict who has been clean and sober for 10 years when presiding over felony cases.

"Every time I was coming down, I felt like the devil was reaching into my soul, stealing my heart," he said of his days spent with drugs.
The crumpled man in Jesus' arms is a metaphor for the way he later faced his own skeletons and weathered the problems of addiction, said Fine, a criminal defense lawyer who will take the bench in January.

Fine believes he is qualified to help those who truly want to battle their own demons and says he'll be able to spot the phonies.
His right arm is covered from shoulder to wrist in a sleeve of tattoos that mark various periods of his life, including the times he battled drugs and alcohol.
"I'm probably the only district judge with this many tattoos," he said. "At least the only one we know about."

Fine, a Democrat, campaigned on his life experiences, saying they would make him a better judge than his rival, Republican incumbent Devon Anderson.
"She did a good job, but I'm more qualified in the hopelessness and futility of addiction," Fine said.

Anderson is one of four judges who preside over Harris County's "drug courts," which divert some drug offenders into treatment and counseling rather than put them behind bars.
Judges in the program volunteer for a once-a-week docket in drug court in addition to carrying on their regular duties.

The other drug court judges — Republicans Caprice Cosper, Brock Thomas and Mike Wilkinson — also lost on Election Night.
Fine said he plans to volunteer for the drug court after a year of learning the ropes as a new judge.
As administrative judge of criminal district courts, state District Judge Debbie Mantooth Stricklin will oversee the transition plan for the drug court after the loss of the four incumbents.
The court's new judges will have to undergo several days of training, Stricklin said.

Fine's journey from addict to judge wasn't easy, and he was lucky he didn't end up behind bars, he said.
He started drinking and smoking marijuana in his teens, he said, graduating to harder drugs in college and continuing to abuse alcohol and cocaine as a practicing attorney.
"By the grace of God," he said, he never appeared in court or met with a client while he was high.
While working as a lawyer in Lubbock, a boss knocked on his door one day, told him that his co-workers knew he had a problem and said that he needed to get treatment.
Days later, he said, he watched the sun come up after a long night of booze and cocaine and felt like a vampire fearing the dawn.
"I was out of cocaine. I was out of money. And the four horsemen of addiction — terror, bewilderment, frustration and despair — were on their way.
"That's when the devil shows up," he said. "It's like he's holding my heart in his hand, laughing at me, saying, 'I got you again!' "

He checked in at a treatment center, went through detox and six months of intense outpatient treatment, learning the tools he needed to stay away from drugs and alcohol.
In the years since, he said, he has cleaned up his life, serving on the board of the Texas Lawyers Assistance Program, a State Bar program that helps attorneys battling addiction and depression.
Now, he said he's well-suited as a judge to help others weather the storm.
"I ran," Fine said, "because I felt like I could help more people as a judge than I could one at a time as clients."
Posted by Sam at 5:46 AM