Be careful of our rights 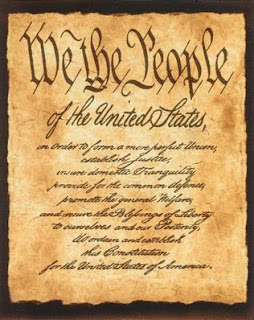 This story exactly tells you why I believe a proposed civilian defense force, as proposed by President-elect Obama during his campaign would be anathema to this country and a potential threat to our constitutional rights.

I'm not saying he wants to do this but why create such an organization?

Russia president tells police to crush crisis unrest
By Denis Dyomkin
ST PETERSBURG, Russia, (Reuters) - Russian President Dmitry Medvedev ordered police on Friday to stamp out any social unrest or crime arising from the global financial crisis.
"We have a stable state ... We do not need a return to the 1990s when everything was boiling and seething," Medvedev told a meeting of senior officials.
"The law enforcement agencies should keep track of what is happening," he said.
"And if someone tries to exploit the consequences of the financial crisis ... they should intervene, bring criminal charges. Otherwise, there won't be order."
The longest economic boom in a generation has helped the Kremlin maintain political stability but some analysts say the financial crisis could give rise to a wave of social unrest.
Russia's benchmark RTS <.IRTS> stock exchange has fallen about 70 percent since May, making it one of the worst performers among emerging economies.
High oil prices which fueled Russia's economic boom have fallen from a peak of over $140 in July to just over $60 now.
The impact on ordinary people so far has been limited, partly because share ownership is not widespread and few people have private pensions. But firms in some sectors have started laying off staff.
Russian Interior Minister Rashid Nurgaliyev told Medvedev at the meeting, in Russia's second city of St Petersburg, that higher unemployment could lead to a rise in crime.
He also said there was a risk of greater extremism and racial tension centred on the millions of immigrants working in Russia, most of them from former Soviet republics.
"The mounting consequences of the world financial crisis could well have an unpredictable effect," he said. "Anti-crisis groups have been set up in the regions ... to intercept any early indications of destabilisation."
Analysts say the financial crisis poses no political threat to the Kremlin for the time being because opposition parties are too weak and divided to mount a serious challenge.
Kremlin opponent and former world chess champion Garry Kasparov predicted this week the crisis would bring new recruits to the opposition. He has announced the creation of a new anti-Kremlin coalition, called Solidarity.
"The processes happening in the opposition ... will of course be connected to the 10 to 15 percent of people who will feel the crisis breathing down their neck," Kasparov told a news conference.
Kasparov and his allies in the past have staged street protests that were dispersed by police but they have failed to gather widespread support or win any seats in parliament.
Posted by Sam at 8:22 AM