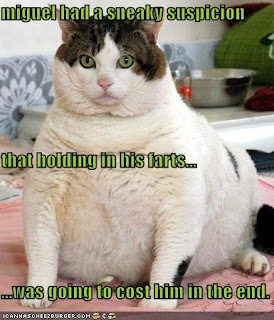 Man, its getting harsh out there in the world.

Busting a 12 year old for passing gas in middle school. Why that is the height of sphisticated humor at that age.
I mean a boy's gotta do what a boy's gotta do.
Florida Boy Arrested For Gas Attack
12-year-old charged after deliberately "breaking wind" in class
From: The Smoking Gun
A 12-year-old Florida student was arrested earlier this month after he "deliberately passed gas to disrupt the class," according to police.
The child, who was also accused of shutting off the computers of classmates at Stuart's Spectrum Jr./Sr. High School, was busted November 4 for disruption of a school function.
A Martin County Sheriff's Office report, a copy of which you'll find below, notes that the 4' 11" offender admitted that he "continually disrupted his classroom environment by breaking wind and shutting off several computers."
The boy, whose name was redacted from the police report released today, was turned over to his mother following the arrest. The young perp turned 13 on November 15.
Posted by Sam at 6:55 AM