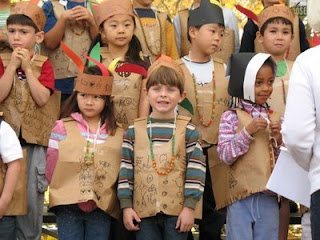 OMG people get a grip!

This is getting a bit ridiculous.

Have a Happy Thanksgiving!

Claremont parents clash over kindergarten Thanksgiving costumes
By Seema Mehta
For decades, Claremont kindergartners have celebrated Thanksgiving by dressing up as pilgrims and Native Americans and sharing a feast. But on Tuesday, when the youngsters meet for their turkey and songs, they won't be wearing their hand-made bonnets, headdresses and fringed vests. Parents in this quiet university town are sharply divided over what these construction-paper symbols represent: A simple child's depiction of the traditional (if not wholly accurate) tale of two factions setting aside their differences to give thanks over a shared meal? Or a cartoonish stereotype that would never be allowed of other racial, ethnic or religious groups?

"It's demeaning," Michelle Raheja, the mother of a kindergartner at Condit Elementary School, wrote to her daughter's teacher. "I'm sure you can appreciate the inappropriateness of asking children to dress up like slaves (and kind slave masters), or Jews (and friendly Nazis), or members of any other racial minority group who has struggled in our nation's history."

Raheja, whose mother is a Seneca, wrote the letter upon hearing of a four-decade district tradition, where kindergartners at Condit and Mountain View elementary schools take annual turns dressing up and visiting the other school for a Thanksgiving feast. This year, the Mountain View children would have dressed as Native Americans and walked to Condit, whose students would have dressed as Pilgrims. Raheja, an English professor at UC Riverside who specializes in Native American literature, said she met with teachers and administrators in hopes that the district could hold a public forum to discuss alternatives that celebrate thankfulness without "dehumanizing" her daughter's ancestry.
"There is nothing to be served by dressing up as a racist stereotype," she said.

Last week, rumors began to circulate on both campuses that the district was planning to cancel the event, and infuriated parents argued over the matter at a heated school board meeting Thursday. District Supt. David Cash announced at the end of the meeting that the two schools had tentatively decided to hold the event without the costumes, and sent a memo to parents Friday confirming the decision. Cash and the principals of Condit and Mountain View did not respond to interview requests.

But many parents, who are convinced the decision was made before the board meeting, accused administrators of bowing to political correctness. Kathleen Lucas, a Condit parent who is of Choctaw heritage, said her son -- now a first-grader -- still wears the vest and feathered headband he made last year to celebrate the holiday."My son was so proud," she said. "In his eyes, he thinks that's what it looks like to be Indian."

Among the costume supporters, there is a vein of suspicion that casts Raheja and others opposed to the costumes as agenda-driven elitists. Of the handful of others who spoke with Raheja against the costumes at the board meeting, one teaches at the University of Redlands, one is an instructor at Riverside Community College, and one is a former Pitzer College professor.

Raheja is "using those children as a political platform for herself and her ideas," Constance Garabedian said as her 5-year-old Mountain View kindergartner happily practiced a song about Native Americans in the background. "I'm not a professor and I'm not a historian, but I can put the dots together."

The debate is far from over. Some parents plan to send their children to school in costume Tuesday -- doubting that administrators will force them to take them off. The following day, some plan to keep their children home, costing the district attendance funds to punish them for modifying the event."She's not going to tell us what we can and cannot wear," said Dena Murphy, whose 5-year-old son attends Mountain View. "We're tired of [district officials] cowing down to people. It's not right."

But others hoped that tempers would calm over the long holiday weekend, and the community could come together to have a fruitful discussion about Thanksgiving and its meaning."Its always a good thing to think about, critically, how we teach kids, even from very young ages, the message we want them to learn, and the respect for the diversity of the American experiences," said Jennifer Tilton, an assistant professor of race and ethnic studies at the University of Redlands and a Claremont parent who opposes the costumes.
Posted by Sam at 7:31 AM