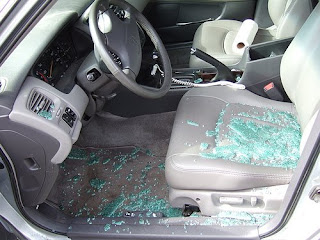 Having had my car broken into and burglarized a few years ago, I am sympathetic to all those this happens to.

My wife's car had been burglarized a few years prior to that.

I am glad this is getting prioritized.

Police, DA target vehicle burglaries
By Robert Crowe - Express-News
San Antonio police have formed a task force — effective this weekend, at the start of the holiday shopping season — to combat the increasing problem of vehicle burglaries.
Citywide, burglaries of vehicles are up 17.6 percent through Nov. 20, compared with the same time last year.
To battle the problem, the San Antonio Police Department and the Bexar County district attorney's office decided to work with the community on a new strategy.
“In law enforcement, we've been chasing our tail around for years doing the same things,” Police Chief William McManus said.
Previous strategies involved targeting high-crime areas. Car burglaries would drop with an increased police presence, but thieves would return once officers stopped targeting the burglars.
The Burglary Vehicle Task Force has a three-prong approach that targets known car burglars while focusing on areas with high vehicle burglary rates. Authorities also advocate prevention by talking to property owners about encouraging motorists to use common sense.
District Attorney Susan Reed said motorists could do their part to fight crime by hiding belongings in the trunk of a vehicle.
“I throw everything into my trunk to keep it from being obvious,” she said.
The district attorney's office is working with the task force to keep vehicle burglars off the street by upgrading charges when possible.
On Monday, police arrested a man with 19 burglary vehicle charges. Some charges were enhanced to felonies that carried $10,000 bonds. The man, one of three arrested through the task force, bonded out of jail Tuesday.
San Antonio police have investigated about 29,000 vehicle break-ins to date this year. The Central Substation recorded the highest increase in vehicle burglaries this year — 27.5 percent — with 8,422 reported this year after 6,605 last year from Jan. 1 to Nov. 20.
The East and South substations recorded the only decreases, 1.7 percent and 2.6 percent, respectively.
Posted by Sam at 7:49 AM