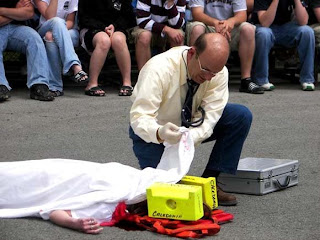 Big mistake to run from the law.

Now you're dead. But you beat the possible DWI charge, didn't you. You also brought a tragedy to your family.

Thank God you didn't kill anyone else while you were being stupid.

A man who had been pursued by San Antonio police on the North Side died Thursday night after his vehicle crashed against a tree in a supermarket’s parking lot. The chase began around 11:30 p.m. on U.S. Highway 281 when a police officer spotted the man traveling northbound at more 100 miles per hour in a white 4-door Chevrolet pickup, SAPD spokesperson Joe Rios said. The driver exited U.S. 281 on Jones Maltsberger Road and pulled over at its intersection of Sunset Road but took off again after the officer got out of his vehicle and approached.

The man fled on Sunset Road for more than a mile until he lost control at the entrance of an H-E-B parking lot on North New Braunfels Avenue. He crashed into a large tree, which broke in half and fell on top of the vehicle. He was declared dead at the scene.Police had given up the chase shortly before the crash. “The officer on the air said that the guy was all over the road,” Rios said. “He stated that the man blew several lights and (the officer) terminated the pursuit before (the man) crashed.”

John Morales, 22, was waiting for a friend to come out of the supermarket when the wreck happened. After a loud crash, Morales said he saw the pickup truck burst up in flames with large amounts of smoke coming out of it. Rios said a police officer extinguished the fire before San Antonio firefighters arrived. Morales said the collision sent debris flying far into the parking lot. “Rocks flew and hit my car,” he said.

Police suspect the driver, who was in his 20s and not carrying any identification, was intoxicated. He had hit two other vehicles on Sunset Road. Another police officer who was called to assist in the pursuit had a separate wreck on Sunset. However, no one was seriously injured in these incidents, Rios said.
Posted by Sam at 8:09 AM