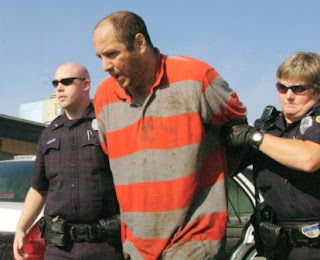 Now let Judge Susan Reed's DA's handle the rest and the community has been made a tad bit safer.

Man suspected in string of robberies is arrested
Robert Crowe - Express-News
San Antonio Police arrested a 49-year-old man who they said was linked to two robberies Saturday and other holdups of banks and a fast-food restaurant in recent days.
Officer Joe Rios, a spokesman for the department, said the man walked into the Wachovia Bank on Loop 410 near Broadway about 11:50 a.m. Saturday and gave a teller a note demanding money.
Rios said the man took the money to a nearby Shell gas station, where he was supposed to meet with people to whom he owed money.
When they saw what appeared to be dye-pack ink on his shirt, they took off and later called police, Rios said.
Police arrived at the location, apprehended the man and recovered the stolen money.
He was suspected in a bank robbery at Washington Mutual on San Pedro Avenue just a couple of hours earlier, Rios said.
Rios said the man faced at least two counts of robbery with further charges likely as the investigation continues.
The man's name was being withheld until he is officially charged.
Police said a man matching a similar description held up banks on McCullough and San Pedro avenues on Wednesday and Thursday. Police believe he also attempted to rob a Taco Cabana on Tuesday.
Rios said the man was always calm and unassuming. He waited in line like a regular customer and presented the note when it was his turn to talk to the teller.
The bank heists happened the same week a San Antonio police officer fatally shot another robbery suspect who had held up a number of Fred's Fish Fry restaurants.
Authorities said business robberies are up 13.5 percent in San Antonio, while the FBI's regional office has seen a 60 percent spike in bank robberies between 2007 and 2008.
Posted by Sam at 7:03 AM