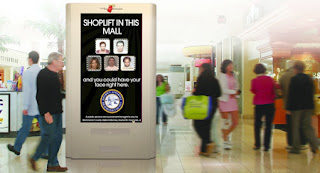 What a great idea, akin to the old custom of putting them in the pillory in the town square.

Maybe next they'll have their pictures posted on the Internet.

Staten Island shoplifters, beware: 'Tis definitely better to give than deceive this holiday season.
Shoppers caught filling their stockings (or anything else) with stolen merchandise could find their faces flashing every six minutes on electronic billboards in the Staten Island Mall. The first-of-its-kind program - initially to feature five convicted Staten Island shoplifters - will run through Christmas.
"I wanted to do something just to warn people who might have ideas about shoplifting," said Staten Island District Attorney Dan Donovan, whose office created the program. "With economic times hard, more people might consider doing this. We just want people to be forewarned."
The digital mug shots in the 15-second ad are of five Staten Islanders already convicted of shoplifting. This rogues' gallery could grow to include anyone arrested and convicted in the upcoming weeks, Donovan said.
"We can put more people up, take more people down," he said. "If you shoplift in this mall, your picture may end up here, too."
Donovan says the intent is not to stigmatize the thieves, but to remind the estimated 1.3 million shoppers who will visit the mall between now and the end of the holidays of the crime's consequences. The cost of the ads was covered with assets forfeited by local criminals, and the DA's office got a discounted ad rate.
The DA worked with Adspace Digital Mall Network to create the ad, which will run between sales pitches for stores around the two-story mall.
Statistics indicated shoplifting was on the rise even before the current economic crisis. A survey of 24 top retailers showed 626,000 shoplifting arrests last year, up more than 9% from the previous year. The two dozen retailers reported nearly $7 billion in losses.
Donovan's plan was hailed by several mall managers, including one from the Gap and another from Macy's. Christa Conte, a spokeswoman for Adspace, said the goal of the electronic billboards is to target shoppers at the point of purchase - and the mug shots are simply a new twist on the concept.
It was a twist Donovan didn't expect. The DA said he's no computer maven and initially conceived of hanging posters around the mall before the idea for a high-tech alternative came up.
"This is not a victimless crime," Donovan said. "Merchants are losing money every day. This is going to capture people's eyes and attention."
Posted by Sam at 8:23 AM