Take it one day at a time 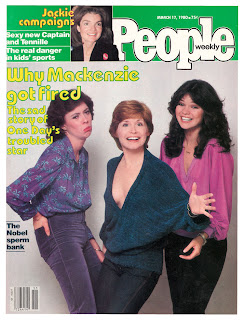 I hope she gets the help she so desperately needs.

Its sad that the date on this People magazine is from 1980.

Mackenzie Phillips pleads guilty to drug charge
(AP)
LOS ANGELES - Former "One Day at Time" television star Mackenzie Phillips pleaded guilty to cocaine possession on Friday and was ordered into another drug rehab program.
Phillips, 48, thanked police for arresting her at Los Angeles International Airport in August, saying "they saved my life" in an address to Friday's court hearing.

The actress, the eldest daughter of late Mamas & the Papas leader John Phillips, was charged with possessing cocaine, heroin and a hypodermic needle or syringe after airport security found drugs packaged in balloons and plastic bags on her.

Phillips starred as Julie Romano in the CBS television comedy "One Day at a Time," which ran from 1975 to 1984. She battled drug addiction during her time on the sitcom and was later fired from the show after undergoing drug rehabilitation but then relapsing.
More recently, Phillips starred as a rock star mom in the Disney Channel series "So Weird."
Posted by Sam at 7:16 AM