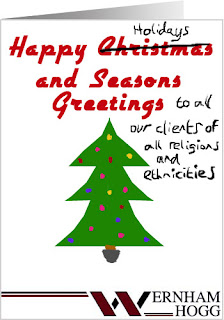 Just put up everything and all will be fine. (Hah! yeah, right)

I will still say Merry Christmas, so there.

FGCU administration has banned all holiday decorations from common spaces on campus and canceled a popular greeting card design contest, which is being replaced by an ugly sweater competition. In Griffin Hall, the university's giving tree for needy preschoolers has been transformed into a "giving garden."
The moves boil down to political correctness.
"Public institutions, including FGCU, often struggle with how best to observe the season in ways that honor and respect all traditions," President Wilson Bradshaw wrote in a memo to faculty and staff Thursday. "This is a challenging issue each year at FGCU, and 2008 is no exception. While it may appear at times that a vocal majority of opinion is the only view that is held, this is not always the case."
Bradshaw's directive struck a chord with FGCU employees. The Staff Advisory Council received 44 anonymous comments on the issue; all were against the ban on holiday decorations.
"It says people are very passionate about this," said council president Ruth Rodrigues, who also is director of auxiliary services. "The holidays are a joyous time, and they want to express themselves."
The council voted Monday to send administration a letter outlining employees' comments.
In Bradshaw's memo, he said the decision was not an "attempt to suppress expression of the holiday spirit." Staffers will be permitted to display holiday decorations on their desks, but not on their office doors or in common spaces. Traditional workplace Christmas parties are not an issue at FGCU.
"We don't generally have Christmas parties here," said Audrea Anderson, associate vice president for community relations and marketing. "There are end-of-the-semester parties or end-of-the-calendar-year parties. They are certainly not related to anyone's beliefs."
Bradshaw plans to convene a committee in 2009 to address future methods of sharing traditions throughout the year.
In 2001, then-President William Merwin lit the university's official Christmas tree, a 22-foot Colorado blue spruce. Children from the college's child care center and university choir performed traditional carols.
Junior Marilyn Lerner, a 20-year-old resort and hospitality management major from California, said she'll miss seeing Christmas trees in the Student Union.
"I think they're pretty," said Lerner, who is Jewish. "It's just a Christmas tree. I don't mind."
Neither does junior Stephanie Tirado, 20, an education major from New York.
"Christmas is no longer just a religious holiday. It's commercialized now," said Tirado, who is Wiccan. "Why don't they just add a menorah then?"
Posted by Sam at 7:44 AM