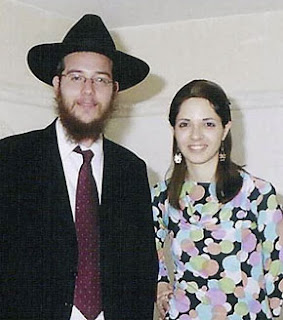 Among the many, many victims of the senseless attacks in Mumbai, India is the Rabbi and Rebbitzin of the Chabad House in Mumbai, Rabbi Gavriel Noach Holtzberg and his wife, Rivka Holtzberg.

A tragedy for all involved, fortunately their young son, Moshe was saved from the slaughter.

We all are in mourning; God rest their souls.

Brooklyn Couple Killed In India
From:-The New York Post
An ultra-orthodox Jewish group based in Brooklyn confirmed Friday that a New York rabbi and his wife were killed in terrorist attacks in India that have claimed more than 150 lives.
Rabbi Gavriel Noach Holtzberg and his wife, Rivkah, who ran the movement's local headquarters in Mumbai, India, were killed during a hostage standoff at the center, said Rabbi Zalman Shmotkin, a spokesman for the Chabad-Lubavitch movement.
The center was one of 10 sites attacked beginning Wednesday.
The couple's toddler son, Moshe Holtzberg, was rescued Thursday by an employee and is now with his grandparents.
"Gabi and Rivky Holtzberg made the ultimate sacrifice," said Rabbi Moshe Kotlarsky, vice chairman of the educational arm of Chabad-Lubavitch.
"As emissaries to Mumbai, Gabi and Rivky gave up the comforts of the West in order to spread Jewish pride in a corner of the world that was a frequent stop for throngs of Israeli tourists. Their selfless love will live on with all the people they touched. We will continue the work they started."
Members of the movement gathered at the Chabad-Lubavitch headquarters Friday to pray for the families of the dead, and one the group's leaders, Rabbi Yehuda Krinsky, spoke at a news conference.
"We express deeply heartfelt condolences to the parents and family of this beautiful young couple and to the family and loved ones of each of those who have been so brutally murdered," he said.
The Holtzbergs arrived in Mumbai in 2003 to serve the local Jewish community. The two ran a synagogue, offering religious instruction and helping people dealing with drug addiction and poverty, Kotlarsky said.
Gavriel Holtzberg's last known phone call was to the Israeli consulate to report that gunmen were in his house, Jewish officials in Brooklyn said. In the middle of the conversation, the line went dead.
Twelve hours after gunmen stormed the center Wednesday, Sandra Samuel, a cook at the center, heard little Moshe's cries outside the room in which she had barricaded herself. She opened the door, grabbed the toddler and ran outside with another center worker.
The little boy's pants were soaked with blood, and Samuel said she saw four people lying on the floor as she fled.
Authorities said three other hostages and two gunmen were also killed but they weren't immediately identified.
Gavriel Holtzberg, 29, was born in Israel and moved to the Crown Heights section of Brooklyn with his parents when he was nine. His wife Rivkah, 28, was a native of Afula, Israel.
The Lubavitchers were one of many Hasidic groups that were uprooted from Eastern Europe by the Holocaust and came to the United States.
They became the most outward-looking of the ultrareligious groups, constructing giant Hanukkah menorahs in public places, proselytizing among less pious Jews and building Chabad centers from Sao Paulo to Bangkok.
The once-tiny sect has swelled in number and influence. Estimates of followers vary widely, ranging from the tens of thousands to a million or more. About 4,000 full-time emissary families direct more than 3,300 institutions around the world.
In response to the Mumbai attacks, New York City police beefed up patrols around large hotels and Jewish centers, including the Lubavitcher headquarters, said NYPD spokesman Paul Browne.
The department already was on alert because of a warning earlier this week of a possible al-Qaida plot to strike the city's rail systems over the holidays.
Posted by Sam at 8:10 AM