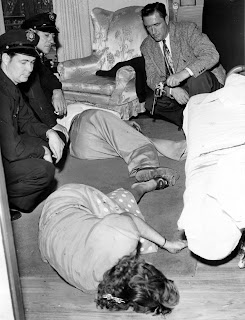 Geeze, why can 't folks just get out of each other's hair and walk away without doing this shit?

Puny egos or what?

BTW it's no longer an attempted murder-suicide now, is it?

Woman shot in attempted murder-suicide dies
By David Saleh Rauf - Express-News
A 46-year-old woman who was shot up to eight times last week by her estranged husband in what police described as an attempted murder-suicide has died, according to the Bexar County Medical Examiner’s Office.
Francisca Mendez was shot multiple times in the early morning of Nov. 5 by her husband, Hipolito Mendez, who moments later turned the gun on himself, police said. Taken to Wilford Hall Medical Center immediately after the shooting, Francisca Mendez remained in critical condition until Monday morning, when she died from her injuries, the medical examiner’s office said.
Her death is the fourth homicide of the month and at least the fourth murder-suicide in San Antonio since mid-July.
According to a police report, officers arrived that morning at Francisca Mendez’s South Side residence and found the woman on the floor of a back bedroom, where she was “bleeding and crying for help.” Her estranged husband was found laying face up in the same bedroom with two gunshot wounds — apparently self-inflicted — to his chest.
"It is kind of unusual to have two gunshot wounds like that," Police Chief William McManus told reporters at the scene.
Police think Hipolito Mendez entered the home through an unlocked door. Francisca Mendez had moved to the home recently after the couple separated in September.
Their 22-year-old daughter and a small child were inside the house at the time. The daughter told police she was asleep when she awoke to “arguing and then shots fired,” the report said.
Alarmed by the noises, she ran to the bedroom and saw her mom on the floor bleeding, with her father standing over the injured woman. Francisca Mendez, according to the report, then told her daughter “to run or she would get shot.” Before leaving the residence, the daughter reportedly knocked the gun out of her dad’s hand and then ran to a neighbor’s house to call police.
Last week’s double shooting is the most recent murder-suicide in the city. Though motives for each are unclear, every incident since mid-July has involved a couple.
On July 17, 60-year-old Kenneth Clark shot and killed his wife, 55-year-old Tanya Clark, before turning the gun on himself at their home in the 13300 block of Larkbrook Drive. Investigators seized from the home a .22-caliber pistol and an "assortment of suicide notes," according to a police report.
In August, 42-year-old Leon Robinson broke into his estranged wife's East Side residence and shot the woman in the back of her head. Robinson shot and killed himself as officers entered the mobile home in the 500 block of Saints Haven. Gwendolyn Robinson, 43, died Sept. 19 at University Hospital. The murder-suicide happened about three weeks after Gwendolyn Robinson told her husband she wanted a divorce.
And in October, Andre Stergis fatally shot himself in front of Lovera Campbell at a home in the 200 block of Porter Street on the East Side. The same bullet also killed Campbell, 28, who was standing next to Stergis, 27. Relatives said the couple had been quarreling the day before because she wanted to leave him
Posted by Sam at 6:51 AM