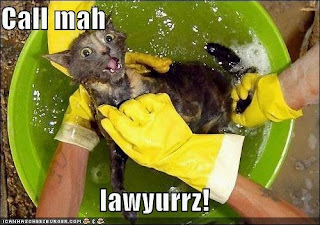 I fortunately never had a co-worker who used that much perfume that it affected me. (At least badly) hee hee

I have been in restaurants or public places where someone has so much perfume on that I could tatse it or it ruined the taste of the food I was having. I can understand and symapathize with the Plaintiff.

Judge says perfume lawsuit can proceed
A Detroit city planner says co-worker's scent interferes with job performance, breathing.
Paul Egan / The Detroit News
DETROIT -- A city of Detroit planner can proceed with her lawsuit alleging a co-worker's perfume made it difficult for her to breathe and impossible to do her job, a federal judge has ruled.
In an opinion released late Tuesday, U.S. District Judge Lawrence P. Zatkoff rejected the city's attempt to have Susan McBride's lawsuit, filed under the Americans with Disabilities Act, dismissed.
McBride "has produced evidence that her breathing is significantly restricted" by a co-worker's perfume, and she has a potential claim, Zatkoff ruled.

Both McBride's Detroit attorney and the chairwoman of the Chemical Sensitivity Foundation said Wednesday that Zatkoff's decision to allow the lawsuit to proceed is significant.
"He recognizes that this is the type of claim that's viable," said attorney Ann Curry Thompson, who represents McBride. "These are types of claims that in many jurisdictions ... are sort of pooh-poohed and are not taken seriously."
Grant Ha, the attorney representing the city in the lawsuit, did not return a phone call Wednesday. Ha said in a June court filing that "there is no medical diagnosis of the alleged condition," and McBride "is not disabled because she is not substantially impaired in a major life activity."
But Zatkoff, who sits in Port Huron, found that McBride's difficulty breathing as a result of her co-worker's perfume does present a potential claim under the federal law designed to protect the disabled from discrimination in public places and the workplace. He dismissed McBride's claims that her chemical sensitivity also impairs her ability to shop for detergents, speak, interact with others, and reproduce.
It's not clear that the city took reasonable steps to accommodate McBride's condition, the judge ruled.
Alison Johnson, chairwoman of the Chemical Sensitivity Foundation in Topsham, Maine, said she welcomes Zatkoff's decision to let the lawsuit proceed.
"These perfume sensitivities are very real, and I can't tell you how many lives they are ruining," Johnson said. "Maybe there's beginning to be recognition that these things are serious."
McBride is seeking unspecified damages. Thompson said the major goal of the lawsuit is not monetary damages but "to educate people about the issue and seek voluntary compliance, where possible."
The city is continuing to fight the lawsuit, which could be headed to trial next year.
Posted by Sam at 6:53 AM