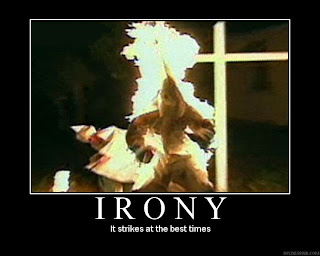 From News of the Wierd
A 38-year-old man was cited for disorderly conduct in Fond du Lac, Wis., in September after he bought a beer for his sons, ages 2 and 4, at the county fair. He could not be cited for providing alcohol to minors because, under Wisconsin law, parents are exempt, but he was written up for swearing at police. [Post Crescent (Appleton, Wis.), 9-24-08]
Meleanie Hain's Pennsylvania concealed-weapons permit was revoked in September after spectators complained about her openly carrying her loaded, holstered Glock at her 5-year-old daughter's soccer game. However, the only penalty under state law is the loss of the privilege of concealment, so that if Hain continues to carry the gun, she must do so openly. [Times Leader (Wilkes Barre)-AP, 9-26-08]

A Buddhist temple in Nakhon Nayok, Thailand, offers quickie "reincarnation" sessions in which people climb into "coffins," "die" while a priest's chants chase away the evil spirits of the old person, who is then "reborn" as someone different. The temple has nine such coffins to serve the long lines of optimists (who must stand well back while waiting, so as not to absorb the "dying" people's escaping evilness), many of whom adhere to predestination beliefs based on one's name and time of "birth," according to a September New York Times dispatch. [New York Times, 9-27-08]

In September, Chad Hardy released the 2009 version of his Men on a Mission calendar, which features photos of young, shirtless Mormon men, intended, he said, to help his church overcome its image of being stodgy, and he said he plans a female version for 2010: Hot Mormon Muffins. (In July, Hardy was excommunicated for producing the 2008 Men on a Mission calendar.) [Provo Daily Herald-AP, 9-26-08]

In the town of Sekiu, near Port Angeles, Wash., in October, Ms. Cory Davis, 56, was shot in the leg by her stove. (A .22-gauge shotgun shell had found its way into some newspapers that she had put on to burn. "There's always that one problem stray," she said.) [Peninsula Daily News (Port Angeles), 10-8-08]
A 21-year-old woman was arrested in Hamilton, New Zealand, in October after she allegedly kicked in the door of her ex-boyfriend's home, then assaulted him because of a custody dispute between the couple over their pet possum. [New Zealand Press Association, 10-8-08]
Least Competent Barroom Brawler
In July Scott Bennett, 48, lost an eye in a fight at the Mavericks night club in Sioux City, Iowa. Then, on Oct. 12, in another fight at Mavericks, Bennett lost his other eye. [Sioux City Journal, 10-14-08]
Posted by Sam at 7:56 AM