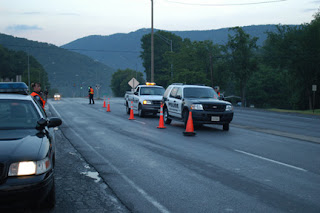 I guess that isn't PC in these times.

DPS won't pursue checkpoints
By Janet Elliott - Express-News
AUSTIN - The Department of Public Safety Friday abandoned plans to set up statewide driver's license checkpoints in the face of strong opposition from a group of state lawmakers.
Public Safety Commission Chairman Allan Polunsky said he would withdraw a request for an attorney general's opinion on whether it was legal for the commission to set up random checkpoints on state highways.
Several legislators said they suspected the checkpoints would be used to crack down on illegal immigrants. The commission in late August issued new rules requiring applicants to prove they are here legally.
Fifteen lawmakers had asked Attorney General Greg Abbott to ignore the request.
One of the lawmakers, Rep. Ruth Jones McClendon, D-San Antonio, said she believed the commission was after illegal immigrants instead of drunk drivers.
"A state agency is making immigration policy for the state of Texas, and that is not their job,'' McClendon said.
At Friday's meeting, Polunsky raised the issue and said it was not appropriate to proceed at this time. The five-member commission agreed.
DPS spokesman Tom Vinger said the AG's opinion was sought "for informational purposes'' only.
"There was never any connection to immigration issues,'' he said. "DPS does not enforce immigration issues.''
Checkpoints have not been allowed in Texas since the state Court of Criminal Appeals ruled in 1994 they must be authorized by a "politically accountable governing body at the state level.'' That case involved a sobriety checkpoint in Arlington.
The Legislature has declined to pass bills setting up procedures for driver checkpoints.
Posted by Sam at 6:28 AM