Yuummm Sausages, sauerkraut and beer, only in New Braunfels, well okay Germany too, but its cheaper to get them here. 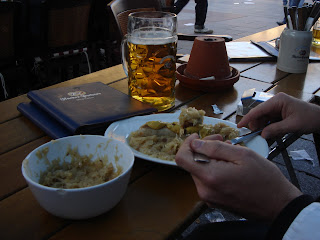 How sad truly, today is the last day of the annual festival of the sausages.

I went on school day Wednesday with one of my daughters whose German class attended. It was wonderful watching kids from kindergarten to high school dancing the chicken dance and dancing (poorly, in my case) to polka music.

It was good, clean fun and truly a joy. make it today if you can or go next year, you will not be disappointed.

Wurstfest winds up today
By Scott Sticker - The Herald-Zeitung
During the last week of Wurstfest people have flocked from all over to join others feasting on sausage and sauerkraut and washing it down with cold beer.Director of Wurst Relations Herb Skoog said Wurstfest had potential to draw a record crowd Saturday and Sunday.“We had a little competition with Halloween and the Texas Tech game last weekend,” said Grosse Opa Hal Herbelin, “but since then we have had absolutely fantastic turnout. I think Wednesday night was the biggest Wednesday I’ve seen for Wurstfest.”

He said along with being large, the crowd this year has been great, and even seemed friendlier than past years. He attributed some of it to the weather, but he said it could be a number of reasons.“I don’t know if it’s because of the economy or a general unrest, but I think people are just glad to have a place to come and see friends, have a good time and relive some memories with their families,” he said.Chrystene Gulledge, the 92-year-old widow of Steve Smith, one of the founding Opas of Wurstfest, was there reliving some family memories with four generations - her daughter, her grand-daughter and her great grand-daughter.“I come for the camaraderie and friendship,” said Gulledge. “We’ve been coming here since 1966. The memories and the food are great.”

The vendors at Wurstfest were working hard to provide bier and sausage to hungry festival-goers.“I’ve only been working an hour today and I can already say it’s a busy day,” said Kevin Wersterfe who was vending sausage-on-a-stick at the Noon Lions booth. “This is on par with previous years - maybe even better.”

First-time Wurstfest attendee Paul Bradshaw, whose Austin-based company, Full Orange, has already started planning for Wurstfest’s 50th anniversary in 2010, said he understood why there were so many people in attendance.“This is all about pure enjoyment,” he said. “I haven’t even seen one frown since I’ve walked in the gates.”Herbelin said since Wednesday they have only had one arrest, which was for public intoxication. He said everything has been going smoothly and the crowd has been great every night.

Skoog said today, which is the last day of Wurstfest this year, is going to be one of the biggest yet. There will be a polka contest at 3:30 p.m. and New Braunfels High School Band will perform at 4 p.m. A Veteran’s Day salute is scheduled for 5 p.m.Admission is $8 and children under 12 get in free. There is no admission fee after 3 p.m.
Posted by Sam at 6:45 AM