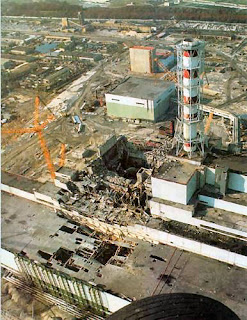 From the folks who gave us Chernobyl.

Somehow, this just doesn't make me feel all warm and fuzzy inside.

Nor do I want to sit and hold hands and sing Kumbaya either.

CARACAS, Venezuela (AP) - Russian President Dmitry Medvedev agreed to help start a nuclear energy program in Venezuela and said Moscow is willing to participate in a socialist trade bloc in Latin America led by President Hugo Chavez.
Medvedev used his visit to Venezuela—the first by a Russian president—to extend Moscow's reach into Latin America and deepen trade and military ties. Chavez denied trying to provoke the United States, but he welcomed Russia's growing presence in Latin America as a reflection of declining U.S. influence.
Chavez and Medvedev planned to visit a Russian destroyer docked in a Venezuelan port on Thursday. The arrival of Russian warships this week for training exercises with Venezuela's navy was the first deployment of its kind in the Caribbean since the Cold War.
Accords signed Wednesday included one pledging cooperation in nuclear energy for peaceful uses. Russia also agreed to work with Venezuela in oil projects and building ships.
Moscow plans to develop a nuclear cooperation program with Venezuela by the end of next year, said Sergey Kirienko, head of the Russian Federal Atomic Energy Agency.
"We are ready to teach students in nuclear physics and nuclear engineering," he said through an interpreter. He said the help would include "research and development" and "looking for uranium in the territory of Venezuela."
Chavez says Venezuela hopes to build a nuclear reactor for energy purposes.
The Venezuelan leader—one of the world's most strident U.S. critics—thanked Medvedev for helping to create a "multi-polar" world with declining U.S. influence.
Medvedev called Venezuela "one of our most important partners in Latin America" and pledged to keep supplying the South American nation with weapons. But he said arms sales to Venezuela "are not aimed against any other country."
Chavez's government has already bought more than $4 billion in Russian arms, including Sukhoi fighter jets, helicopters and 100,000 Kalashnikov rifles.
Chavez had assembled a group of Latin American allies for talks hours before Medvedev's visit, and leaders including Bolivia's Evo Morales and Nicaragua's Daniel Ortega joined them for a late-night meeting.
Medvedev said Russia is ready to "think about participating" in the Bolivarian Alernative for the Americas, likely as an associate member. Chavez launched the socialist trade bloc, named after South American independence hero Simon Bolivar, as an alternative to U.S.-backed free-trade pacts.
The Russian naval squadron deployed to the Caribbean includes the destroyer Admiral Chabanenko and the nuclear-powered cruiser Peter the Great, the largest in the Russian fleet.
The military show of force is widely seen as a demonstration of Kremlin anger over the U.S. decision to send warships to deliver aid to Georgia after its conflict with Russia, and over U.S. plans for a European missile-defense system.
But U.S. Secretary of State Condoleezza Rice told reporters in Washington on Wednesday that "a few Russian ships is not going to change the balance of power" in the region.
Medvedev was to finish his four-nation Latin American tour in Cuba.
Medvedev said he also discussed the global financial crisis with Chavez, and "exchanged different ideas of what actions to take in this situation." Chavez blames the financial crisis on U.S. free-market capitalism.
Posted by Sam at 6:45 AM