Get the eff out! 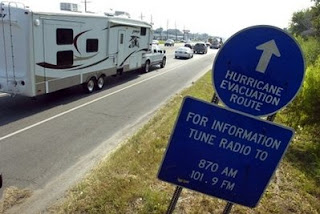 Get out.
Get out now.
Can it not be anymore clearer? You are on your own if you stay in the city lower than the surrounding waters?

NEW ORLEANS (AP) - Residents were ordered to flee an only partially rebuilt New Orleans Sunday as another monster storm bore down on Louisiana nearly three years to the day after Hurricane Katrina wiped out entire swaths of the city.

Hurricane Gustav, which already killed more than 80 people in the Caribbean, strengthened quickly into a Category 4 and was poised to become a Category 5 storm, packing winds in excess of 156 mph. It slammed Cuba's tobacco-growing western tip before moving away from the island country into the Gulf of Mexico.

New Orleans Mayor Ray Nagin used stark language to urge residents to get out of the city, calling Gustav the "storm of the century."
"This is the real deal, not a test," Nagin said as he issued the evacuation order Saturday night. "For everyone thinking they can ride this storm out, I have news for you: that will be one of the biggest mistakes you can make in your life."

Forecasters were slightly less dire in their predictions, saying the storm should make landfall Monday afternoon somewhere between western Mississippi and East Texas, where evacuations were also under way. It's too early to know whether New Orleans will take another direct hit, they said, but city officials weren't taking any chances.

Gustav's center was about 485 miles southeast of the Mississippi River's mouth at 2 a.m. EDT, with top winds of near 135 mph expected to strengthen as it crosses the central Gulf. It was moving northwest near 15 mph.

The mandatory evacuation of the city's west bank, where levee improvements remain incomplete, was to begin at 8 a.m., with the east bank to follow at noon. It's the first test of a revamped evacuation plan designed to eliminate the chaos, looting and death that followed Katrina.

The city will not offer emergency services to those who choose stay behind, Nagin said, and there will be no "last resort" shelter as there was during Katrina, when thousands suffered inside a squalid Superdome. The city said in a news release that those not on their property after the mandatory evacuation started would be subject to arrest.