Look out the prosecutor is packing 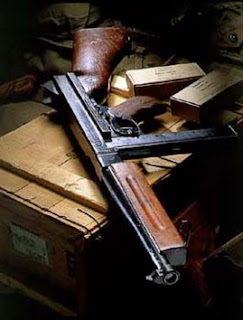 Gives a whole new meaning to quick draw in the court room.

AUSTIN — Harris County District Attorney Ken Magidson has asked the state's top lawyer if he can legally stop his assistants from taking handguns into courtrooms despite a new law removing most restrictions on where prosecutors with gun licenses can carry their weapons.
Magidson requires members of his staff, even those with concealed handgun licenses, to obtain his permission, as a condition of employment, before they can carry a firearm into a courtroom.
He is seeking Attorney General Greg Abbott's opinion on whether he can continue that policy, despite a 2007 law that allows prosecutors with handgun licenses to pack their pistols anywhere except jails or prisons. They also are prohibited from carrying them while intoxicated.
“While it may now be legal for a prosecutor to carry a licensed concealed handgun in a courtroom, I retain significant concerns with regard to the level of training that should be required in order to permit prosecutors to safely carry firearms in the volatile environment of a criminal courthouse,” Magidson said in a letter to Abbott.
“A disgruntled court participant might attempt to seize control of a weapon in order to effect an escape or harm other individuals,” he added.
The letter, sent earlier this month, recently was posted on the attorney general's Web site.
Magidson said his predecessor, Chuck Rosenthal, enforced a formal written policy prohibiting prosecutors from taking firearms into courtrooms.
Although the Legislature changed the law, Magidson said he has continued to require his assistants to obtain his permission before taking handguns into court. He said he allows only prosecutors “who have demonstrated a high level of proficiency to a certified firearms instructor on my staff” to do so.
He is seeking Abbott's opinion because several of his assistants questioned the legality of his policy.
Magidson argued that the new changes don't restrict his ability, as an employer, to impose his own requirements on employees.
“The authority of an employer to restrict the carrying of licensed handguns on the premises under the employer's control is expressly recognized” in state law, Magidson said.
Rob Kepple, executive director of the Texas District and County Attorneys Association, said his group didn't seek the 2007 changes. He said as far as he knew they had become an issue only in Harris, Fort Bend and El Paso counties but didn't know how any disputes were resolved.
Fort Bend County District Attorney John Healey couldn't be reached Monday for comment.
Magidson allows prosecutors who have handgun licenses to carry their weapons in the district attorney's offices and unrestricted areas of county buildings.
He said he didn't know how many of his assistants have gun licenses.
Posted by Sam at 1:48 AM