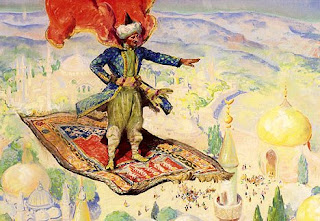 Yes, but the real question is does he want to go?

Or will he be volunteered?

Iran's space agency says it will send man to space

TEHRAN, Iran - State TV says Iran's space agency aims to send an astronaut to space within 10 years.
The report Thursday quotes Space Agency chief Reza Taghipoor saying the mission's timing will be decided over the next year. It gives no other details.
Iran has stepped up its space ambitions in recent years, worrying world leaders already concerned about its nuclear and ballistic missile programs.
Iran would have a ways to go before a manned flight. On Sunday, Taghipoor said Iran test-fired a rocket capable of carrying a satellite into orbit. The two-stage rocket released equipment that beamed flight data back to ground control.
Posted by Sam at 6:02 AM