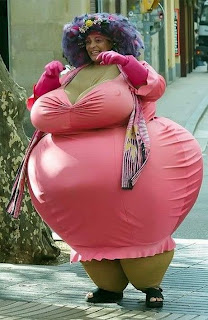 More problems with handling an obese defendant. Giving her a GPS device seems a little silly given she is so hard to move around.

Suspect's obesity causes headaches for county
HOUSTON — Authorities are scrambling to figure out how to arrest, incarcerate and prosecute a woman estimated to weigh nearly half a ton who was indicted on capital murder charges.
Mayra Rosales, 27, has remained under house arrest since she was charged in March with beating her 2-year-old nephew to death. Rosales could face the death penalty if she is found guilty of capital murder.
But now that her case has moved into the state court system, law enforcement officials must address a whole new set of logistical problems before it can go to trial.
“We're struggling to find a place where she can be kept under lock and key,” Rene Guerra, the Hidalgo County district attorney, told the McAllen Monitor. “We have to wait and see what the judge decides.”
The Hidalgo County Jail is not physically equipped to handle an inmate who weighs nearly 1,000 pounds, Sheriff Lupe Trevino said. And even if his office found a cell and a bed large enough for her, deputies are unsure that the jail doctor is qualified to handle her various medical needs.
The costs of checking Rosales in for constant medical care could reach as high as $5,000 a day, according to the district attorney's office.
“I'm not ready to take that kind of money out of the county coffers if there are other options,” Guerra said. “But I will if I have to.”
Trevino suggested Friday that the court allow Rosales to remain under house arrest and be monitored using a global positioning system until her presence is required in court.
“I think she has shown from the day of her (initial) arrest to the day of her indictment that she's not a flight risk,” he said.
Once she is summoned to court, a new set of problems arises.
Family members had to dismantle part of Rosales' La Joya home when they moved soon after 2-year-old Eliseo Gonzalez Jr.'s death. And accommodating her in the cramped courtrooms in the Hidalgo County Courthouse could be impossible.
State law requires that all district court business take place in the county seat — in this case Edinburg. But court hearings could be moved to a more spacious building within the city limits.
“You could turn a gym into a courtroom if you needed to,” Trevino said.
Earlier this year, a New York Supreme Court justice agreed to arraign a 500-pound man in a parking lot, where he sat in the bed of a pickup truck.
Rosales has refused to comment since her initial arrest. It was unclear Friday whether she had retained an attorney.
Rosales' 20-year-old sister, Jamie Lee Rosales, the boy's mother, was indicted Thursday on one felony count of injury to a child. The offense is punishable by up to life in prison and $10,000 in fines.
Prosecutors allege the mother left her child with the boy's aunt even though the younger Rosales knew her sister was incapable of caring for a toddler.
A prison sentence of any length for the elder Rosales is likely to raise a whole new set of questions.
“The cost may be astronomical,” Trevino said. “But you can't put a price on justice.”
Posted by Sam at 5:53 AM