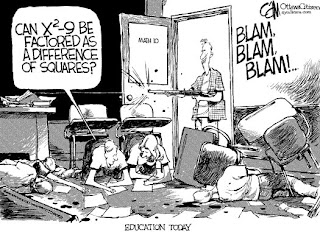 While it all sounds well and good; who doesn't want to protect the school children, I worry about the gun getting into the hands of one of those students. How do you make the gun readily availible to the teacher and yet, not readily availible to a kid, particularly one intent on doing harm?

Thank God mine will be out of high school in a few more years.

HARROLD, Texas — A tiny Texas school district might be the first in the nation to allow teachers and staff to pack guns for protection when classes begin later this month, a newspaper reported.
Trustees at the Harrold Independent School District approved a district policy change last October so employees can carry concealed firearms to deter and protect against school shootings, provided the gun-toting teachers follow certain requirements.
For teachers and staff to carry pistols, they must have Texas licenses to carry concealed handguns; be authorized to carry by the district; receive training in crisis management and hostile situations; and use ammunition that is designed to minimize the risk of ricochets in school halls.
Superintendent David Thweatt said the small community is a 30-minute drive from the sheriff's office, leaving students and teachers without protection. He said the district's lone campus sits 500 feet from heavily trafficked U.S. 287, which could make it a target.
“When the federal government started making schools gun-free zones, that's when all of these shootings started. Why would you put it out there that a group of people can't defend themselves? That's like saying ‘sic 'em' to a dog,” Thweatt said in Friday's online edition of the Fort Worth Star-Telegram.
Thweatt said officials researched the policy and considered other options for about a year before approving the policy change. He said the district also has various other security measures in place to prevent a school shooting.
“The naysayers think (a shooting) won't happen here. If something were to happen here, I'd much rather be calling a parent to tell them that their child is OK because we were able to protect them,” Thweatt said.
Texas law outlaws firearms on school campuses “unless pursuant to the written regulations or written authorization of the institution.”
Thweatt did not disclose how many of the 50 or so teachers and staff members will be armed this fall, to keep that information from students or potential attackers.
Barbara Williams, a spokeswoman for the Texas Association of School Boards, said her organization did not know of another district with such a policy. Ken Trump, a Cleveland-based school security expert who advises districts nationwide, said Harrold is the first district with such a policy.
The 110-student district is 150 miles northwest of Fort Worth near the Oklahoma border.
Posted by Sam at 7:54 AM