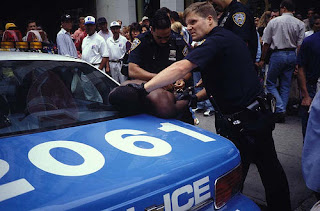 Good job on catchin' the perp.

Excuse me the alleged perp.

With the help of a Crime Stoppers tip, San Antonio Police on Wednesday arrested a man on a murder charge in the stabbing death of 33-year-old Evaristo Mena.
The man arrested is alleged to have stabbed Mena, who was killed just after midnight June 4 while he stood in a parking lot at a taco restaurant in the 300 block of East Mitchell Street.
Surveillance video at the parking lot showed at least one, possibly two, men running toward another man, identified by police as Mena.
The 47-year-old suspect's name was not released by the Express-News because he had not been officially charged by a magistrate judge late Wednesday night.
Posted by Sam at 6:09 AM