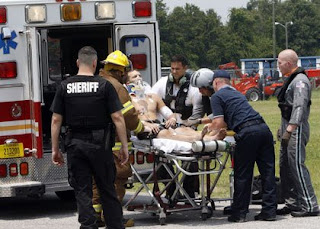 Another shooting in the Murder City.

Maybe the action is moving north from Nuevo Laredo?
Can anything be done to stop this? Sure, how about stiffer prosecution?

Man hospitalized in W. Side shooting
- Express-News
A 21-year-old man suffered life-threatening injuries early Saturday when he was shot multiple times on the West Side, according to a police report.
Police found Esequiel Sosa shot two times — in the stomach and buttock — as he lay on the ground in the 100 block of Dolores Avenue at 2:15 a.m. According to the report, Sosa had just left a bar with a friend when the two were flagged down in their vehicle by someone who the pair believed to be a friend. When they stopped the SUV, several men began assaulting the pair, the report said.
Sosa was unresponsive when police arrived and was transported to University
Hospital in critical condition. His condition there was not released.
Posted by Sam at 8:01 AM