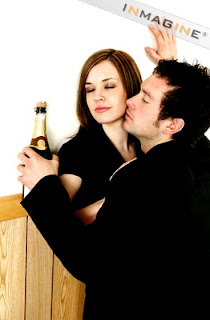 You got to admit that it was a novel defense.

But you can't acquit.

He kissed, he told and he was cited for underage drinking

A teenage college student tried -- and failed -- to persuade Mankato police that a makeout session was behind his being tipsy.
After campus security at Minnesota State University, Mankato, reported a stumbling male on the street about 2:45 a.m. Saturday, police approached 18-year-old James A. Carroll and gave him a preliminary breath test. Carroll scored a 0.063 percent reading, police Cmdr. Amy Vokal said Tuesday.
Carroll's excuse, according to Vokal, was that he "was making out with a drunk" female about 30 minutes earlier.
For the record, Vokal said, such a scenario "is not possible. The breath [that is tested] comes from the lungs."
As for the partner in crime Carroll blamed, "That person didn't come forward," Vokal said.
Carroll was cited for underage consumption and sent on his way, Vokal said.
Posted by Sam at 8:11 AM