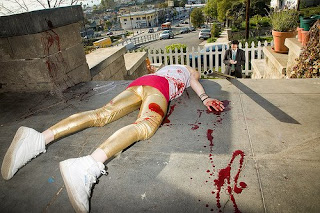 I hope she will recover and be alright.

Man kills himself after wounding wife

Wednesday, three weeks after Gwendolyn Robinson, told her husband, Leon, that she wanted a divorce, the man broke into her East Side home and shot her before killing himself, police and relatives said.
Relatives, including at least one youth, were inside the residence in the 500 block of Saints Haven when Leon Robinson, 42, broke in about 3 a.m. They escaped and called police before hearing gunshots inside.
Tactical Response Unit Officers entered the mobile home and found Leon Robinson dead in a bedroom closet. Nearby, his wife had a gunshot wound to the back of her head. Gwendolyn Robinson, 43, was taken to University Hospital in critical condition.
San Antonio police Sgt. Marcus Booth said the husband apparently shot himself after shooting his wife.
Posted by Sam at 6:02 AM