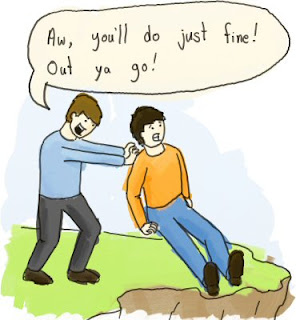 Sounds like this matter should be reviewed before irreparable harm is done.

You know, irreparable harm, like he is made dead when he gets back there.

Man says he's refugee; U.S. says he's fugitive
By Hernán Rozemberg - Express-News
In the eyes of the federal government, Alexis “Alex” Nguitte-Bekongo is one more fugitive immigrant in the country illegally who should have returned home years ago.
He counters that he's a law-abiding family man who's flabbergasted by seeing the country that once welcomed him with open arms now wanting to dispatch him to possible death.
Nguitte-Bekongo, a 44-year-old from the Central African Republic, was arrested by immigration agents last week as he walked out of a supermarket near the Medical Center, accused of being on the lam since he was ordered out of the country seven years ago.
He now sits in Karnes City in the custody of U.S. Immigration and Customs Enforcement, as the agency seeks approval from Central African Republic consular officials to deport him.
If the repatriation takes place, he's a dead man the moment he steps off the plane because his government considers him a military deserter, Nguitte-Bekongo's friends and family said.
“They know who he is. The moment he arrives, they'll grab him and we'll never see him again,” said best friend Jean Ballet, 47, himself a Central African Republic émigré who — unlike his colleague — won his political asylum petition and was able to settle with his family in San Antonio.
Nguitte-Bekongo's wife, Jamie, 27, recalled his story: He began his U.S. voyage 15 years ago with the blessing of the U.S. Army, invited to participate in a training program for foreign soldiers. His chosen specialty was nursing. Training began at Fort Sam Houston and then continued at Fort Gordon in Georgia.
Completing the program in the Alamo City in 1996, he was ready to return home when he learned of violent unrest after the government was overthrown. Members of his tribe, Yakoma, became targets of indiscriminate persecution.
More than a decade later, the country remains in turmoil. The U.S. State Department maintains a travel warning, noting continued fighting between rebels and government forces.
During the 1996 coup, both Nguitte-Bekongo's and Ballet's homes were destroyed; their families fled to the Democratic Republic of Congo.
Even though his military superiors nominated him for the U.S. training program, for reasons unknown to him, he was labeled a deserter and traitor.
For that reason, Nguitte-Bekongo believes he'll be killed immediately if he returns home, his friends and family said.
He tried to remain in the U.S. by seeking asylum, his wife said. And though Ballet won his case citing the same fears, Nguitte-Bekongo's petition was denied, as was his appeal.
By then, he'd married Jamie, who tried to sponsor him directly since she's a U.S. citizen. But the application wasn't successfully processed, a mishap they blame on poor legal work by Earl Levis, their lawyer.
Levis, who has had seven disciplinary cases filed against him according to Texas State Bar records, said he could not remember details since the case was several years ago.
But he placed the blame right back on the couple. After first seeking his services, they then disappeared, he said, noting he was surprised to hear of the pending deportation since they had a good case.
Immigration agents in San Antonio only were doing their job when they arrested him, said Rudy Rodríguez, who directs ICE's regional fugitive operations teams — tasked solely to track down and pick up immigrants who ignored final orders of deportation.
A final order was issued for Nguitte-Bekongo in April 1997, which he appealed with the asylum petition. He was supposed to have left the country in August 2001 but he didn't and thus turned into a fugitive, Rodríguez said.
“There was nothing unusual about this case — our everyday fugitive operations work,” he said.
Immigration law is a labyrinthine of rules and policies that they did their best to follow, Nguitte-Bekongo's wife said. She thought her husband maintained legal status because of the marriage application, she said, noting they never were told he was supposed to have left the country for good.

Gail Erlitz, Nguitte-Bekongo's former U.S. Army instructor, now retired, was shocked to hear of his arrest.
She recalled how he was readying to return home when the coup took place. She and other military officials, as well as U.S. consular officials in Central African Republic, wrote Nguitte-Bekongo's superiors to assure them he was not deserting his post.
“We were really worried about him,” said Erlitz, who lives in Georgia. “He was very respectful, dedicated — if I can help him in any way, I'll do it.”
Nguitte-Bekongo's wife said this week has been the toughest of her life.
Still in disbelief, the soft-spoken, stay-at-home mom who planned to complete her bachelor's degree wondered how she will take care of the couple's four kids — ages 1 to 7 — since the family's savings are gone.
She was able to pick up his last paycheck from the nursing home where he worked, but was unable to cash it because it requires his signature, she said.
But even more worrisome, she said, is her husband's safety. She has been on the phone frantically seeking help, from friends to politicians.
There might be a chance, she said, that relatives in France could try to claim her husband. She'd prefer knowing he's far away but safe — anywhere but back to Africa.
“I just want him to come home,” said Julian, 6, to the nodding concurrence of his sister, Nicole, 5, who chimed in: “He always gives me candy.”