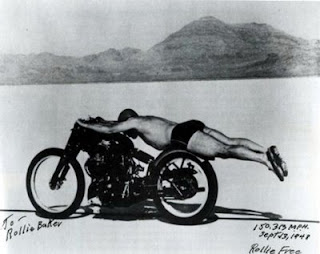 Man o' Law, having one time hit 138 mph somewhere along I-10 in a Corvette, purely in the interest of justice of course, says 200 + mph is hauling!!

Retired police officer breaks world speed record
By David Uhler - Express-News
A retired San Antonio police officer broke a world speed record last week at the Bonneville saltflats.
Then his brother got behind the wheel a couple of days later and broke it again.
Russell Duffin, 63, now is the owner of the record in Unblown Grand Touring Sports with a speed of 230.545.
A 1962 graduate of Thomas Jefferson High School, Duffin is the owner of Duffin Auto Service, an engine rebuilding shop near San Antonio International Airport.
Posted by Sam at 7:44 AM